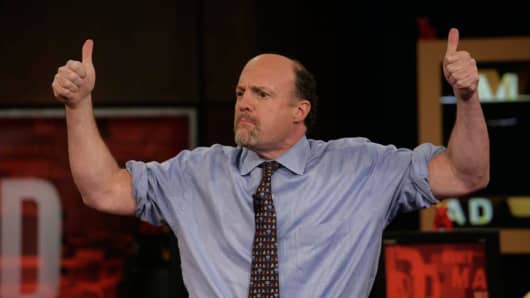 Naturally, several “Mad Money” viewers have asked whether host Jim Cramer prefers ConocoPhillips, the exploration and production company, or Phillips 66, the refining business. Avid viewers know he likes when companies break themselves up in order to unlock value for shareholders. If an impending break-up makes sense, Cramer thinks it’s likely worth owning the stock. ConocoPhillips is no longer part of that group, though, because it broke itself up last week.

A similar break-up occurred with Marathon Oil in July 2011. For those who owned the stock from the time of the announcement in January 2011 through the date of the break-up some seven months later, the stock posted a 30 percent gain. After the split-up, though, the stock is down 18 percent. Marathon Petroleum, its refining business, is also down by 2 percent.

“Once the actual break-up occurs, the break-up trade is over and you have to analyze the separate components on their own merits,” Cramer said, noting investors should analyze both ConocoPhillips and Phillips 66 now that they are standing on their own.

ConocoPhillips may sport a 4.8 percent dividend yield, but it lacks growth. The Houston-based company is growing at a “snail’s pace” of 3 to 5 percent, Cramer said. It’s also not cheap, he added. When viewed from a debt-adjusted cash flow basis, it sells at a premium to rivals Chevron, Apache and Marathon. It’s also pricey on a P/E multiple basis, selling for 8.2 times forward earnings while Chevron sells for 7.6 times earnings and Apache and Marathon both trade at more than 6 times earnings.

All things considered, Cramer prefers Chevron. Even though it has a smaller dividend yield of 3.5 percent, it has more growth and that means more upside potential. For those interested in owning shares of an exploration and production company, though, Cramer suggests EOG Resources. He likes EOG because it has top-rate assets in North America and strong oil production prospects.

As far as Phillips 66 goes, the company gets roughly half of its value from refining. Cramer said CEO Greg Garland has gone out of his way to highlight the “non-refinery side of things,” such as its pipeline and chemicals divisions, but the bottom line is that it is a refiner and not a great one at that. The refining business is currently plagued by low growth and high margins, so Cramer recommends staying away. Additionally, PSX isn’t necessarily a cheap stock, considering it currently sells for nearly 7 times earnings.

So what’s the bottom line?

“Now that ConocoPhillips has broken itself up, I think the opportunity here has come to an end, just like with Marathon Oil, where the stock made you a bundle in the lead up to the spin off, but afterwards both stocks were dead money,” Cramer said. “Sometimes the best decision is to just move on and forget about it.”

—Reuters contributed to this report