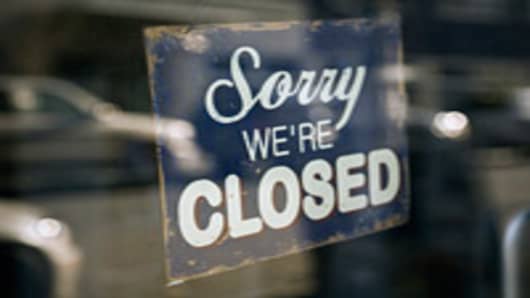 Many people dream of opening their own business. But some would-be entrepreneurs are finding that state licensing requirements are so arduous that it would take years and thousands of dollars before they ever would be able to hang out a shingle.

Licenses are intended to set standards in order to protect customers. But many state licensing laws can be erratic, illogical and burdensome — and stop some people from launching a small business, says the Institute for Justice, a public interest law firm. A recent IJ study looked at 102 lower- and moderate-income occupations that require licenses, including those in which practitioners can start their own businesses. Among them: manicurists, barbers, massage therapists and people who have construction skills like painting and masonry.

The IJ found a big problem: Some licenses force people to get training for skills they'll never need. And that training could be prohibitively long and expensive. For example, in three states and Washington, D.C., you can't open an interior design firm unless you're licensed as a designer. And that requires an average of six years of schooling and apprenticeship.

Jestina Clayton wanted to start a hair braiding business in her home near Salt Lake City. She checked with the state to be sure that she didn't need a license. She was told several times that she didn't, that braiding wasn't one of the services covered by a cosmetology license. So Clayton went ahead and in 2009, placed an ad online about her business. She got an email threatening to report her to the state for working without a license. It turned out that the law had changed, and she could not braid hair without a license.

Clayton explored cosmetology training, and found that no school nearby taught braiding. She would need 2,000 hours of training in other skills she didn't need, simply to have a legal braiding business. "It would be a waste of time and money," Clayton says.

Clayton and the IJ have filed suit in federal court in Utah to overturn the requirement.

It might seem like there's no reason for an occupation like braiding to have such heavy license requirements. But lawyers and academics who have studied licensing laws say the hurdle is one way to limit or eliminate competition for those already in business. Often, the license, especially one that includes a wide variety of seemingly unrelated skills or services, is sought by a trade or industry group.

A license can "create barriers to entry and creates profits for those who are politically well connected," says Steven Lanza, an economist and editor of The Connecticut Economy, a publication of the University of Connecticut.

When licenses are challenged, that's when it can become clear that the intent is to limit competition, not protect the public, says Dick Carpenter, a research director at the IJ. "Those in an industry are asking for protection so they can enjoy an economic advantage," he says.

The monks at Saint Joseph Abbey in St. Benedict, La., had always made simple pine coffins for themselves, but found that the public was interested in buying them. Abbot Justin Brown says that in 2007, the abbey started Saint Joseph's Woodworks, but even before the business made its first sale, "we got a cease-and-desist letter from the State Board of Embalmers and Funeral Directors." Under state law, in order for the monks to sell coffins, they had to go through training as funeral directors, including the practice of embalming bodies.

No matter that they weren't handling bodies in any way.

The abbey tried to reach a compromise with the board, and also appealed to the state Legislature. But "there's a strong lobby in the funeral industry in Louisiana," Brown says. "They worked to put the law in and they didn't want the law to be amended."

"You really feel, when you're facing something like that, rather defenseless," Brown says.

Ultimately, the abbey sued in federal court and won last year. Scott Bullock, an attorney with the IJ, says the court ruled that "there was no rational basis for requiring persons who only want to sell caskets to become licensed funeral directors."

As the abbey's case shows, changing a licensing law is difficult. "It accumulates — all these sorts of rules and regulations and you don't revisit them because no one's out there saying, we should get rid of these things," says Lanza, the Connecticut economist. And a lengthy court fight pits a would-be small business owner against an industry group with much greater financial means.

The IJ's and other studies have found that licensing can be a heavy burden to a state's small business growth. According to a 2007 study by the Reason Foundation, a think tank, California licensed 177 occupations while Missouri licensed 41.

In addition to state requirements, a business owner or a worker may also have to obtain licenses from a city, town or village. A 2005 study done for the Small Business Administration found that in Kentucky, "each local jurisdiction in which a company did business required separate registration, using different forms and asking for somewhat different information."

"That is clearly an objectionable and unnecessary paperwork burden," the SBA study concluded.