This Summer an 'Eerie Echo' of Pre-Lehman: Zoellick

The summer of 2012 is looking like an “eerie” echo of 2008 but euro zone sovereign debt has replaced mortgages as the risky asset class that markets are anxious about, said Robert Zoellick, President of the World Bank. 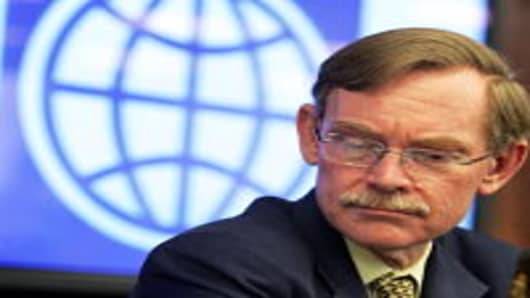 Banks are under stress and depositors have begun to “jog,” Zoellick wrote in an editorial in the Financial Times on Thursday.

“The European Central Bank, like the U.S. Federal Reserve in 2008, has sought to reassure markets by providing generous liquidity, but collateral quality is declining as the better pickings on bank balance sheets are used up,” he added.

To prevent investors from fleeing in panic, Europe must be ready with more than liquidity injections to contain the consequences of a possible Greek exit. “If Greece leaves the eurozone, the contagion is impossible to predict, just as Lehman (Brothers’ collapse) had unexpected consequences,” Zoellick said.

What is needed is a so-called “euro-sovereign” guarantee of bank deposits and other liabilities, as the guarantees of some national sovereigns are unlikely to be sufficient.

In the editorial, Zoellick argues Europe needs to deploy euro zone bonds, recapitalize banks by using funds from the European Stability Mechanism (ESM) and provide medium-term funding assurance to countries such as Spain.

The creation of euro zone bonds has been a controversial subject with France’s new President Francois Hollande calling for the currency bloc to issue common bonds and Germany rejecting such a move on the grounds it will weaken fiscal discipline.

But Zoellick argues time is running out and euro zone leaders “may be nearing a 'break the glass' moment: when one smashes the pane protecting the emergency fire alarm.”

If a crisis does occur, the European Central Bank may not have the ability to “respond fast, fully, and forcefully” because of differences on the bank’s board, Zoellick said.

“A Greek exit would trigger a hit to confidence in other sovereign euro assets. Euro zone leaders need to be ready. There will not be time for meetings of finance ministers to discuss the outlook and debate the politics of incrementalism. In panicked markets, investors flee to safe assets, sparking other flames.”