Got Cash in Greek Banks? Don't Pull It! 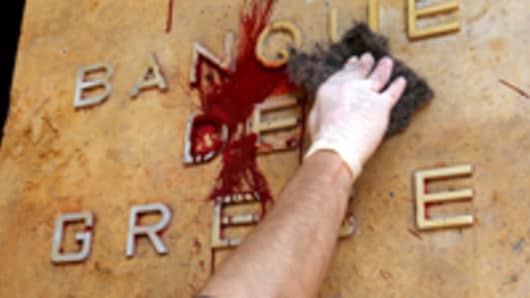 Bloomberg
A man removes paint from the sign of the central bank of Greece following demonstrations in Athens, Greece, on Monday, Feb. 13, 2012.

Here’s the best reason not to remove cash from Greek banks.

The very existence of deposits in Greek banks is a mystery to many outside observers. Why on earth would anyone—including Greeks—still have money in a bank located in Greece?

Despite the tales of withdrawals, it is clear that a true run on the banks of Greece has not yet occurred. Foreigners and most wealthy Greeks have withdrawn deposits but the system still has billions of Euro denominated deposits. Given that these accounts face a non-trivial risk of being redenominated into a new drachma and consequently devalued, shouldn’t any rational person move all his euro deposits out of Greece?

There are some very practical difficulties with this. For one, over 17 percent of working Greeks are on the public payroll. According to people familiar with the matter in Greece, nearly all payments to these public employees are made into Greek banks. What’s more, pensioners and others on public assistance receive payments into Greek bank accounts.

At any given time, then, there will be a sizable amount of euros flowing into Greek bank accounts. Even if some of this is immediately withdrawn and sent abroad, a snap shot of the Greek banking system will make this flow of deposits appear to be a steadfast stock.

But there’s another reason some Greeks aren’t withdrawing their deposits—they plan to benefit from a devaluation. A Greek who owes a large euro denominated debt to a foreign bank or business would benefit from the devaluation of that debt. Under any likely scenario of a currency change, Greek courts would consider the debt redenominated into the new devalued drachma.

Foreign courts, however, might insist that the obligation be repaid in euros. Enforcement of this, however, would only be possible against assets held outside of Greece. What this means is that a Greek debtor might not be able to benefit from the debt devaluation scenario if he moves his money outside of Greece.

Note that this is really only attractive to some types of debtors in Greece. It is not attractive, for instance, to those whose debt obligations are trade liabilities for ongoing businesses.

In fact, for Greek businesses in need of trade credit, it may become necessary to have bank accounts outside of Greece to ensure that debts can still be paid in Europe. Your business partner creditors aren’t going to be too eager to do business with you if you suddenly cannot pay them because capital controls prevent moving funds abroad or because you are technically insolvent now that all your financial assets have been depreciated.

But individuals or businesses who have large debts to foreign financial institutions and don’t anticipate needing to access credit markets again—say, homeowners with mortgages from foreign banks—would benefit from currency redenomination and depreciation. But they need to keep their cash in Greece in order to avoid seizure following default.

We're on Google Plus too! Click here for John's Google+ page.