Why Are Some Strategists So Bullish on India?

Even as worries mount over India’s slowing growth and tumbling currency, some strategists are recommending investors ramp up their exposure to the country’s equities, which are trading at the cheapest level in 20 months. 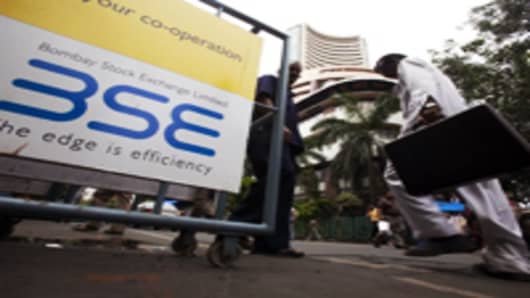 JPMorgan upgraded Indian stocks to overweight from neutral on Thursday, raising its year-end target for the benchmark Sensex index to 19,000 – a 12 percent upside from current levels.

The Sensex, which is currently trading at 13.3 times this year’s earnings, compared to highs of 21.8 times seen in October 2010, presents an attractive entry point, according to the bank.

Nicholas Ferres, Investment Director at Eastspring Investments, has added his first overweight position for the country’s stocks in five years this month. Ferres agrees that valuations look compelling and have largely priced in concerns over slower growth in the South Asian economy.

“Valuations have improved considerably over the past few years and have priced a lot of the secular deterioration in returns. The market is extremely oversold,” Ferres said in a note.

Kumar says India’s mounting current account deficit, which has been a concern for investors, could fall significantly as each one dollar drop in the price of oil, reduces India’s import bill by $1 billion dollars.

“On the current account deficit front, this development is extra positive. If Brent crude remains below $90 for the rest of the year, it could help reduce the deficit from 3.94 percent to 2.6 percent,” he said.

He adds that falling commodity prices give the Reserve Bank of India more room to ease monetary policy. The RBI last cut interest rates by 50 basis points in April, but refrained from further easing at its June meeting due to worries about inflation.

Weak Rupee a Boon for Exporters

India’s exporters, which reap the benefits of weakness in the rupee, are an attractive investment at the moment, say experts.

“Looking across the sectors, we conclude that Indian IT and pharmaceutical companies have the biggest upside from the rupee’s depreciation,” said Taimur Baig, Chief Economist at Deutsche Bank.

The decline in the rupee , which has lost over 25 percent against the dollar in the last 12 months, boosts the repatriated profits of exporters and also makes Indian-made goods more competitive.

“For every 1 percent change in the rupee, the net income of the top-tier Indian (IT) vendors is expected to improve by 50-110 basis points,” Baig added.

Kumar expects the Sensex, which has risen almost 10 percent year-to-date, to perform better in the last quarter of this year and early next year. This is typically the strongest period for Indian markets because most of the government spending is focused during the second half of India’s fiscal year, Kumar said.