The world is facing a new food crisis as the worst US drought in more than 50 years pushes agricultural commodity prices to record highs. 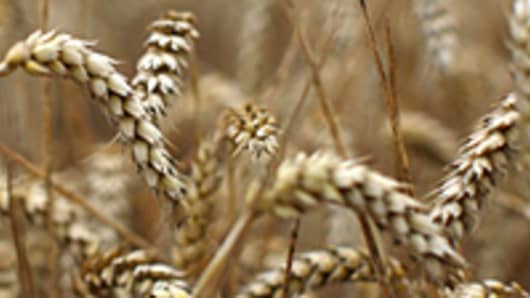 Corn and soyabean prices surged to record highs on Thursday, surpassing the peaks of the 2007-08 crisis that sparked food riots in more than 30 countries. Wheat prices are not yet at record levels but have rallied more than 50 percent in five weeks, exceeding prices reached in the wake of Russia’s 2010 export ban.

The drought in the US, which supplies nearly half the world’s exports of corn and much of its soyabeans and wheat, will reverberate well beyond its borders, affecting consumers from Egypt to China.

“I’ve been in the business more than 30 years and this is by far and away the most serious weather issue and supply and demand problem that I have seen by a mile,” said a senior executive at a trading house. “It’s not even comparable to 2007-08.”

David Nelson, global strategist at Rabobank, added: “Today the [US crop] disaster is real, whereas to some degree the big run-up in prices in 2008 was speculatively driven.”

José Graziano da Silva, director general of the UN’s Food and Agriculture Organisation, told the Financial Times: “I am certainly concerned about the recent rises in food commodity prices, given their potential implications especially for the vulnerable and the poor, who spend as much as 75 percent of their income on food.”

In 2007-08, a spike in prices triggered food riots from Bangladesh to Haiti as the number of hungry people in the world surpassed 1 billion. However, economists point out that supplies of rice and to a lesser extent wheat – key staples for many of the world’s poorest people – remain abundant, subduing prices.

Joseph Glauber, chief economist at the US Department of Agriculture, also argued that the current situation was “far better” than 2008. “Prices are higher, and there’s no question about that, but we really had an extreme shortage of wheat in 2007-2008 and I don’t see that at this point.”

Justin Forsyth, chief executive of Save the Children, said the rise in prices was still likely to have an exaggerated effect on the world’s poorest people. “Large numbers of people live very close to the edge,” he said. “Failed rains and high food prices have tipped lots of people over the edge from being able to cope to not being able to cope.”

The USDA slashed its corn production forecasts last week by the most in a quarter of a century, and conditions continue to deteriorate in the worst US drought since 1956.

Meteorologists have warned that at least half of the US corn and soyabean belt will remain dry over the next fortnight, and traders have cut their estimates for the US corn crop by a further 8-15 percent. “I get on my knees every day and I’m saying an extra prayer right now,” Tom Vilsack, US agriculture secretary, said on Wednesday.

Prices for corn on Thursday hit a record $8.16¾ a bushel, and traders believe prices could rise above $9 by early August unless the weather in the US dramatically improves.

Mr Graziano da Silva said that the FAO would convene an intergovernmental summit before the end of the year to address the issue of food security if the crop situation deteriorated further.