EBay reported quarterly earnings and revenue that topped Wall Street's expectations on Wednesday, but its shares wavered in extended-hours trading. 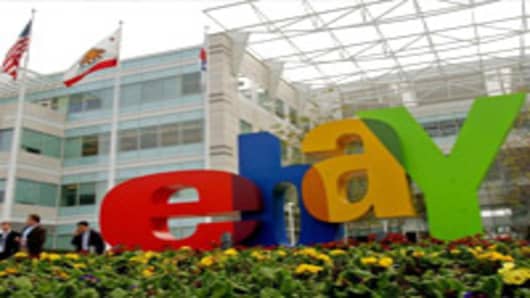 After the earnings announcement, the world's largest online marketplace's shares briefly turned negative but last traded slightly higher after the closing bell. \(Click here to get the latest quotes for eBay.\)

The company posted second-quarter earnings excluding items of 56 cents per share, up from 48 cents a share in the year-earlier period.

Analysts had expected the company to report earnings excluding items of 55 cents a share on $3.36 billion in revenue, according to a consensus estimate from Thomson Reuters.

"The results were very good," said Gil Luria, an analyst at Wedbush Securities. "I don't think anybody in their wildest dreams thought Marketplaces would be growing this fast."

The company stuck to its full-year forecasts as it avoided a hit from Europe's economic woes.

EBay shares have slipped in recent weeks on concern a weak European economy might dent buying and selling on the company's online marketplace — and lucrative cross-border transactions in particular.

However, eBay said its Marketplaces business generated its strongest organic growth since 2006 and highlighted "strong growth" in Europe and the Asia-Pacific region.