Facebook Now the Worst Performing Stock in Past 3 Months 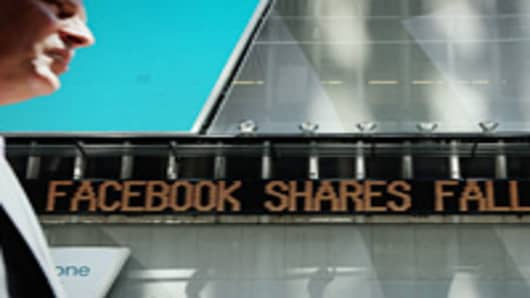 Getty Images
A news ticker announces the falling share price of Facebook in Times Square on August 16, 2012 in New York City. Shares of Facebook fell today on the NASDAQ stock exchange on the first day insiders were allowed to sell their shares.

With its third-heaviest volume ever, Facebook shares closed below $20 for the first time on Thursday, as its initial lockup period expired. The intensified selling pressure came on the first day that some Facebook insiders could begin selling their stock.

Thursday’s six percent sell-off capped a very rough first three months for the social-network giant's stock. Its price has fallen 48 percent since it went public at $38 on May 18. During this period, Facebook has underperformed every single other Dow Industrials, S&P 500 and Nasdaq 100 stock.

As a result of its steep stock-price drop, Facebook has also seen its market cap slashed enormously since going public. While it had a $104 billion valuation at its IPO pricing, Facebook’s market cap has fallen by $50 billion over the past three months (as of Thursday’s close).

In the three months since, the COMBINED market cap lost by all of those 26 Nasdaq 100 stocks is just $27 billion -- or about half of the $50 billion that Facebook has lost in market cap in the same period.