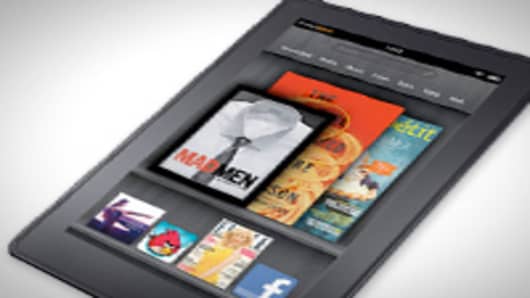 Nobody else seems to be saying it, so I will: Amazon and Google are playing a dangerous game.

The name of that game: Profit-free hardware.

We've come to know the results as the Kindle Fire and the Nexus 7.

Today at Amazon's event in L.A., we expect to see the next phase of its vision, even as Google ramps up shipments of its tablet. Both have 7-inch screens, running different versions of the Android operating system. Both started out costing about $200 to make. And both have sold for about $200. (Read More: Amazon Expected to Unveil New Kindle as Tablet Wars Heat Up)

Amazon and Google can do this — for a while. They can do it because they have high-growth, multi-billion-dollar revenue businesses. Amazon booked $12.8 billion in net revenue last quarter, and Google $12.2 billion. And they can also do it because the math works, at least for now.

Amazon and Google both know that if people buy and use their cheap tablets, it will drive more Google searches and Amazon purchases.

But I think that it's important to note that there are scenarios where this could end badly for either company.

For a case in point, look at what happened to HP's TouchPad tablet.

In case you've forgotten (or blocked it from memory if you were an HP investor), the TouchPad launched about 14 months ago at $499, the same price as the iPad. It didn't sell.

Less than six weeks later, HP killed it off ... sort of. The company actually discounted it dramatically to clear inventory, finding that while it was a dog at $499, it was a hot item at $99 or $199. Even so, HP ended up taking a $3.3 billion write-down to shutter the business and the webOS platform.

That's the trouble with hardware. If it flops and flops badly, it can vaporize profits. There are big costs that go along with guaranteeing manufacturing capacity, securing components, predicting demand, building up inventory and distributing product.

At the moment there's no clear sign that either Amazon or Google's efforts will fail as spectacularly as HP's did. But with Apple poised to compete in the sub-$300 tablet space where these guys are barely breaking even anyway, the risks keep getting more serious.

We'll see if Amazon's announcement today does anything to make the high-end Kindle more of a sure thing.