Will He or Won't He? Obama Faces Jobs Report Dilemma

Imagine you're Barack Obama, about to give the most important political speech of your presidency, and someone on your staff hands you one of the best pieces of economic news you've seen yet. 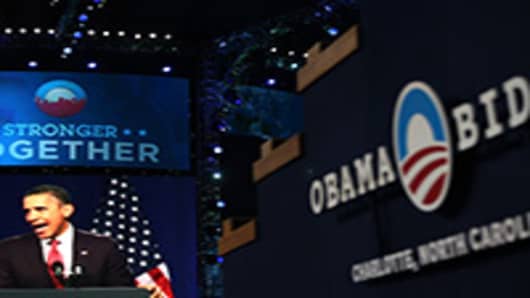 Trouble is, the information often is a major influence on the financial markets and is embargoed until the next morning.

Do you keep it to yourself — or do you at least drop enough hints that astute listeners can draw some logical and important conclusions?

That was the dilemma the president faced when he prepares to delivered his speech as the climactic event for this week's Democratic National Convention.

At some point Thursday afternoon, the White House learned the gist of what's in the Labor Department's nonfarm payrolls report that reveals the national unemployment rate (learn more), but which the public will not see until 8:30 am ET Friday.

Wall Street was abuzz Thursday with speculation of whether Obama's remarks might deliver a hint of what's to come, particularly since the day's news indicated that the report could be a good deal better than the meager 125,000 job growth number that economists had expected.

"Normally I'm dismissive of those kinds of speculations about advance information in the employment report, but this is actually one of those instances where everything you said is true," said David Resler, chief economist at Nomura Securities in New York.

"Let's suppose we had a bigger-than-expected increase in payrolls. Would he allude to that?" he continued. "That's as much about getting into the psychology of the man as it is the facts at hand."

The possibility, raised this morning in the Wall Street Journal and a generator of water-cooler talk around the Street, was tantalizing but for the most part considered unlikely.

Yet that may not stop traders from watching tonight's speech and still trying to parse out language, however subliminal or discrete, that indicates a direction for Friday's report. The payroll report almost always generates significant moves in the market, and they've been primarily negative for the past several months. (Read More: Economy Creates 163,000 New Jobs, but Rate Rises to 8.3%)

"There's a danger that the markets in Asia react to anything he says, even if he studiously avoids mentioning it," Resler said. "My sense is people outside the U.S. don't get the nuance and subtleties with which American politicians speak."

For instance, if Obama should brag on Wednesday's report from ADPshowing that private firms created 210,000 jobs in August — much more than expected — that in itself could indicate that the government report will verify the ADP numbers, which in the past have veered wildly from Labor's count.

"I get why it's a thought. He's going to know the number in his head," said Nicholas Colas, chief market strategist at ConvergEx in New York. "People will parse it out. He's going to have to defend his record. But I think it would be a mistake to try to overinterpret that into a general sense about tomorrow's number."

Richard Hastings, macro strategist at Global Hunter Securities in Costa Mesa Calif., said Obama won't need to violate any embargoes to brag up the recent state of the jobs market, even though there has been a record 41 straight months of unemployment above 8 percent during Obama's tenure

"There are a few things that are not getting enough attention. The one thing that comes to mind is job retention," Hastings said. "That is revealed by lower numbers in weekly jobless claims."

Hastings doubts that Obama will violate the embargo.

Still, traders have been known to do anything to get an advantage, and a peek into a key economic report would be huge.

For those wishing to do so — well, happy hunting.

"There's already been some recent complaints about the way data gets pre-released to a few select sources," Hastings said. (Weekly jobless claims and housing starts are two recent examples.) "So somebody might tell him in light of that you don't want to go near it."

UPDATE: Though Obama mentioned the word "jobs" 16 times in his speech, there were no apparent references to the Friday payrolls report.