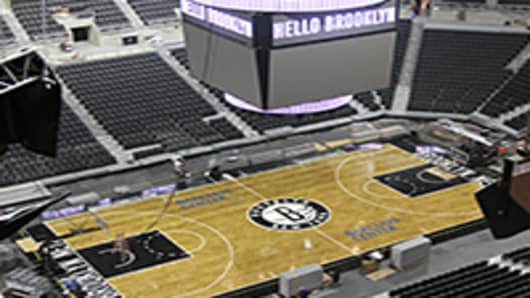 Four words many thought would never go together.

Two stand out even more: Nets and cool.

At Friday's ribbon cutting for the Barclays Center, the new Brooklyn home for the NBA's Nets franchise, a transformation was clear.

The New Jersey Nets were never cool. The BROOKLYN Nets are.

It all starts with entertainer Jay Z. Yes, Beyonce's lesser half. He owns only one-fifteenth of one percent of the franchise, but he seems to have complete ownership of the team's style.

He designed the logo, taking it from red, white and blue to the rugged simplicity of black and white. He helped design elements of the Barclays Center, including the look of the basketball court itself.

"Jay and I collaborate on a lot of different things," said Brett Yormark, CEO of the Nets and the Barclays Center. Yormark admits, he actually has him on speed dial.

"He's obviously a tastemaker, and he's got incredible talents," Yormark said. "He lends advice, provides input and has a great vision."

Jay Z didn't appear at the ceremony — most likely to keep the focus on the arena and the team — but his role in the facility's launch is crucial. He sold out eight shows to kick off things, starting on September 28.

In fact, the entire enterprise has momentum — from ticket sales to apparel. And it's all difficult to believe considering this move was delayed for years due to the financial crisis and other political obstacles.

The vision of actually being in Brooklyn may have taken a long time, but the vision of becoming a BROOKLYN brand — and a popular one at that — was realized faster than expected. (Read More: Decades Later, Brooklyn Has Its Own Pro Team Again)

And they've yet to play a game here.

Yormark added that the Nets WILL be profitable in year No. 1 in Brooklyn.

A huge part of that has been sponsorships. Barclays , and its $400 million commitment over 20 years, has been in place for some time, but other major brands have signed on, like a $2 million per year commitment from American Express .

Ironically, Amex couldn't reach a renewal with Madison Square Garden , so they took a bridge and inked a deal with the Nets.

Competing with MSG and the Knicks already seems to be a rivalry off the court, but Yormark doesn't see it that way. (Read More:Sports for the One Percent)

"We don't think about them," he said when asked about competing for sponsorship money, media coverage and fan support. "But we do want to create a rivalry on the court."

Regardless of what he says, it's "game on" off the court already, and the hoops rivalry should begin November 1 when the Knicks make their first trip to Brooklyn.