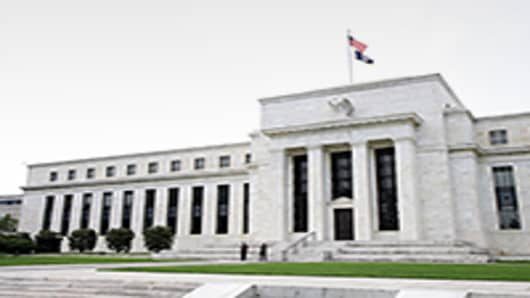 The latest round of extraordinary Federal Reserve stimulus is risky and leaves little room to maneuver should another crisis hit, economist Lawrence Lindsey told CNBC’s “Squawk Box” on Wednesday.

Lindsey said that with the Fed purchasing at least $40 billion a month in mortgage debt through QE3, “they are buying the entire deficit.” (Read more: Fed Pulls Trigger, to Buy Mortgages in Effort to Lower Rates.)

Lindsay said he agreed with the Fed’s first two rounds of quantitative easing. Now, with the economy now growing closer to its trend rate, “doing something that’s really out of the ordinary is risking things.”

He added, “If this becomes the new ordinary, it’s hard to imagine the Fed’s maneuvering room” should another crisis hit. (Read More:Why Fed Policy Just Like the NFL Refs: El-Erian.)

The central bank's recently announced bid to stimulate the economy has also taken the pressure off politicians to deal with the U.S. fiscal cliff, Lindsay argued, which could result in destabilizing tax hikes and spending cuts automatically taking effect early next year.

“The Fed, maybe because it can't do otherwise, has told the Congress: 'We're going to buy your bonds no matter what,'” Lindsey said. “I think that's keeping the pressure off the president, off the Congress.”

The effective of QE3 on interest rates may also keep Congress from reining in borrowing.

“If the (Fed) chairman’s estimates of the effectiveness of QE3 on interest rates come true, we’re going to be down to an average cost of borrowing for the government of 0.6 of a percentage point,” Lindsey said. “Why would any Congress not borrow and spend if they could borrow at 60 basis points?”