Gasoline prices are likely to keep falling, after Super Storm Sandy shut down highways and air travel across the East Coast. 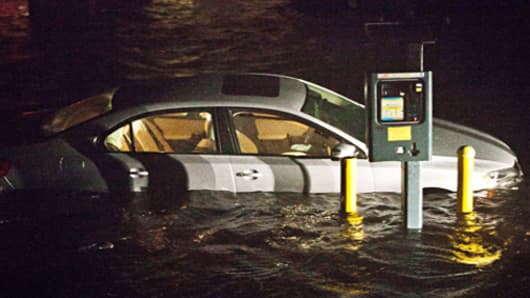 Gasoline at the pump continued to decline, with the national average for unleaded regular $3.53, a penny lower than Monday and 11 cents cheaper than a week ago.

Kloza and others said gasoline could move higher in the short term but the dynamic favors lower prices.

Five East Coast refineries producing gasoline were all in the path of Sandy. The Linden, N.J.-based Philips 66 refinery, one of the nation's largest, remained closed Tuesday after it was shut pre-emptively ahead of Monday's storm. The plant did see some flooding, and it was awaiting a return of power in the next day or two. But several other refineries, which had been operating at reduced levels, were restoring operations. (Read More: Trading Oil in the Wake of Sandy)

The refineries produce about 6.5 percent of the U.S. gasoline. Another refinery, owned by Hess, was also shut down in New Jersey, but it does not make gasoline. The Colonial pipeline, which transports gasoline to the East Coast, said it did not have flooding or operational issues at its Linden tank farm but it was waiting for power to be restored.

The destructive storm came ashore in South Jersey on Monday, flooding shore communities, before turning northward to flood lower Manhattan, coastal New York and Long Island, and then into New England. The massive storm, which merged with another storm, impacted Maryland, Delaware and stretched into the Midwest. 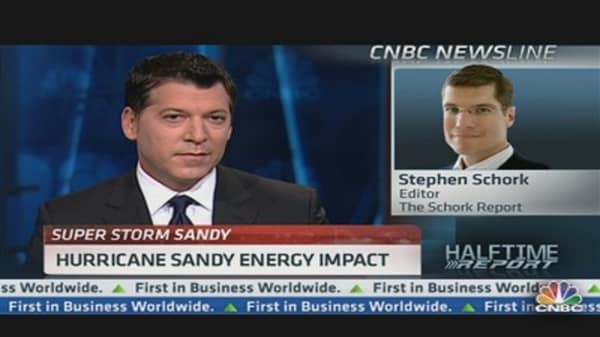 Traffic in the mid-Atlantic was halted during Monday's storm and sharply reduced Tuesday, as cleanup and power crews worked to clear debris and restore electricity, knocked out by the dangerous storm system. Many schools and businesses were closed or operating with reduced staff, and trading activity in the stock market and bond market remained shut down Tuesday.

Andrew Lipow, president of Lipow Oil Associates, estimates that the gasoline production losses due to Sandy would amount to about 1.5 million to 1.7 million barrels , but the demand is expected to have dropped by 2 million barrels. The cancellation of thousands of airline flights also could create a backup in jet fuel. The drop in demand in refined products also takes pressure off of crude, which has been falling.

West Texas Intermediate was flat Tuesday, up just 12 cents at $85.67 per barrel.

"This is a demand destruction event, and if you really think about it, you have an Election Day coming up. We're not talking about a weekend that would have seen much demand. Until you get to Thanksgiving, you have one of the softest demand seasons for gasoline," Kloza said. "I think WTI is probably fairly valued right now. We're seeing a lot of weak prices that don't trade in the futures market."

He said heavy Canadian crude was less than $60 a barrel recently, while Bakken crude from North Dakota was $10 a barrel cheaper than WTI. Kloza said that is cheaper because of rail snags due to the storm.