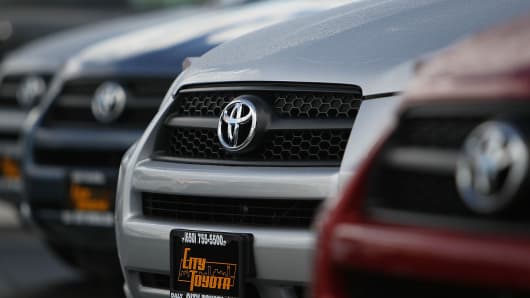 Getty Images
The Toyota logo is displayed on the grill of brand new Toyota RAV4s on the sales lot at City Toyota in Daly City, California.

Fifty-five years after Toyota became the first Asian automaker to sell cars in the U.S., the Far East has climbed to the top of the mountain with American car buyers.

In fact, Asian brands have surpassed the Big 3 in sales this year. It's a reflection of the resurgence by Japanese brands following last year's earthquake and tsunami. It also shows a new reality for Detroit where a trimmed down Big 3 with fewer brands is finding it tougher to win over American car buyers.

The Global Battle for America

Why have the Asian automakers moved into the lead in the U.S.?

While the increased supply of vehicles by the Japanese Big 3 (Toyota , Honda and Nissan ) following last year's earthquake and tsunami has helped boost their sales, dealers think there is a more basic reason: Americans are more comfortable with the Asian brands.

"No one cares anymore if you're driving a Toyota, or Hyundai, or Subaru," said Scott Adams, an auto dealer in Kansas City, Missouri. "The old issues about 'buying American' don't matter anymore because most Japanese and Korean models are built here in the U.S." (Read More: Younger Car Buyers Coming Back, Picking Korean Brands.)

In fact, 77.4 percent of the cars, trucks and SUVs sold in America this year were built in America. Nearly every major automaker who sells vehicles in the U.S. has at least one plant in the U.S. and in many cases they've expanded their production in the last couple of years to keep up with America's surging auto demand.

It shouldn't be a surprise that the Big 3 control a smaller percentage of their home market. After all, over the last 15 years each of them has dropped at least one brand from their stable. Some, like Volvo, Land Rover and Jaguar were sold. Others like Hummer, Mercury and Plymouth were simply shut down. As a result, there are fewer brands and dealers of Big 3 models. (Read More: GM Tops October Sales Estimates, Others Disappoint.) 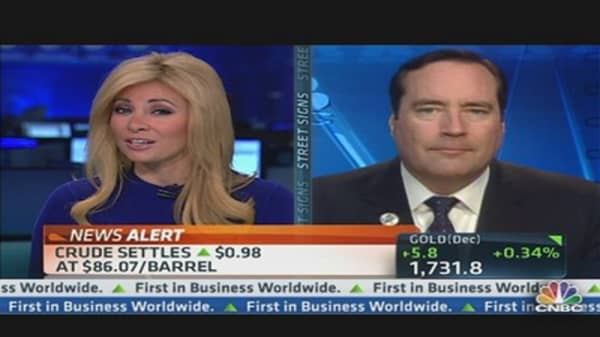 By comparison, foreign brands have steadily grown over the last 40 years. In recent years, many added dealerships because of the auto meltdown in 2009. Coming out of that crisis, many dealerships that used to sell Chrysler or GM models were closed and later reopened with new owners selling foreign brands like Hyundai r Kia.

One major dealer who sells both domestic and foreign models said the shift has largely gone unnoticed because Americans have become more comfortable with a wider variety of Asian brands.

"It used to be Toyota, Honda and Nissan were the truly established Asian brands in America. Now, people are just as comfortable with Hyundai, Kia and Subaru," said the dealer, who did not want to reveal his name because he sells both domestic and foreign brands.

Will the Big 3 ever retake the lead in the U.S.?

In the late '90s, when the Big 3 had almost a 60 percent market share, few expected Detroit to lose so much ground, so quickly in the U.S. By 2007, their share of the U.S. fell below 50 percent. Now, with Detroit's share of the U.S. market down to 45 percent, the question is where it finally settles. Is it possible the Big 3 could retake the lead in the U.S.?

"Will it change? No. The Big 3 are definitely much more competitive than they were 10 years ago, but so are the Asian brands," Adams said. (Read More: Toyota Camry Surges Past Ford F-150 to US Top Spot.)

"When people come into my dealerships their concern is 'what's best for me?' They don't care about the brand name and whether it's American or Japanese," he said. "They just want the car or truck that gives them what they want."

These days, what American car buyers want are Asian brand cars and trucks.