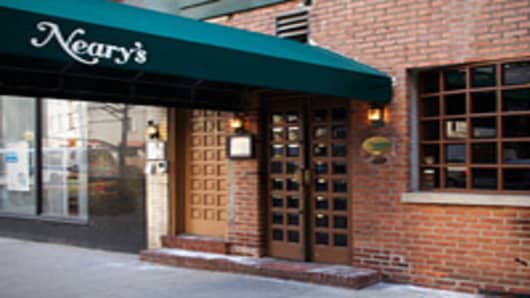 Una Neary, tapped yesterday to become one of the newest partners at Goldman Sachs, is not one of the best-known executives at that storied investment bank.

But there is one place in New York City where everybody knows her name—the Upper East Side high-end Irish pub named "Neary's."

The place was opened on Saint Patrick's Day in 1967 by Una's father, Jimmy Neary, who immigrated to New York from Sligo, Ireland in 1954 and still can be found at his namesake establishment greeting customers almost every evening. Una, the eldest daughter of Jimmy, was born a couple of years later and worked there as she grew up, alongside her sister Ann Marie and mother Eileen.

Neary joined Goldman Sachs from the Federal Reserve in 2009, brought on to oversee the bank's compliance with a new set of regulations that applied to the investment firm after it officially became a bank holding company during the financial crisis.

Neary joined the Federal Reserve Bank of New York just after graduation from Manhattanville College in July 1990 as an assistant bank examiner in the domestic banking department. At age 29, she became the youngest bank examiner in the country. In June 2000, she was appointed an officer of the bank assigned to the relationship management function, according to a press release from the NY Fed. In 2004 she was promoted to vice president of credit risk in the NY Fed's bank supervision group.

Many customers at Neary's over the years probably had no idea that the tall, blond woman who greeted them at the door was a moonlighting bank examiner and, later, a managing director at Goldman. She's known for having a friendly and warm manner. She's quick with a good joke and has an easy laugh. And, as one regular (who spoke on the condition that I not use his name) put it, "She's not hard on the eyes."

With apologies to Goldman CEO Lloyd Blankfein, who I am told is quite charming, when was the last time you heard that phrase used about a partner at Goldman Sachs?

(Read more: Blankfein on CNBC: 'Nobody Can Flagellate Themselves as Well As Goldman Sachs')

Neary wouldn't comment on her work at Goldman or the Federal Reserve. But she did confirm that Neary's still plays an important role in her life.

"Neary's is a very special place for my family," she said.

The pub has a long, wooden bar just inside the entrance. It looks very much like what every Irish pub in New York City aspires to be. The dark-wood paneled dining room is lined with red-leather banquettes. Pictures of politicians who have passed through Neary's decorate the walls, alongside books of some notable authors who have frequented the pub.

Neary's serves lunch and dinner, with its menu bragging that the restaurant is open every day except Christmas. The menu is an assortment of steaks and seafood, alongside Irish-American classics like sliced corned-beef, lamb chops with mint jelly, and pork chops with apple sauce.

The place is a favorite of nearby residents—and lately has been drawing some of the diaspora of regulars of Elaine's, the legendary Upper East Side restaurant that closed after its proprietor died. Kevin Duffy, a longtime bartender at Elaine's, now tends bar at Neary's.

But nearly everyone I spoke with about Neary's agrees that it is neither the food nor the décor that draws in the crowds—it's the Nearys themselves.

"No one visits this high-end Irish pub without mentioning the owner, Jimmy Neary, whose hospitality makes everyone feel like a regular," the official review in The New York Times says.

Readers of Mary Higgins Clark's mystery novels will be familiar with Neary's. The bar is featured in many of her books. In one of them, Jimmy Neary actually solves a murder. Clark herself is a regular. There has occasionally been some speculation among patrons that some of Clark's heroines, who tend to be women in their late twenties or early thirties with Irish ancestors, are based on the Neary girls. Clark herself has said that she doesn't base her characters directly on real-life people.

Una still helps out at Neary's. You can often find her there on weekends, waitressing, hosting and doing "whatever Dad needs," her sister Ann-Marie said.

If you find yourself at Neary's, keep in mind that your waitress may hold one of the most prestigious and well-compensated positions on Wall Street. But you still ought to tip her well.