U.S. companies may be paying out big dividends before tax rates rise next year, but for now they're holding the line with executive bonuses. 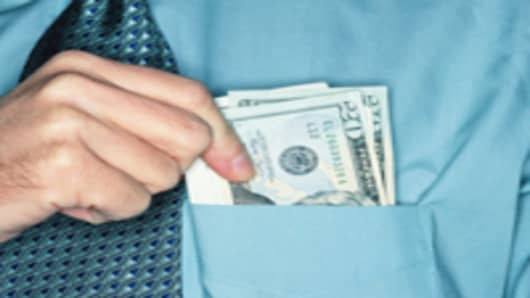 "Politically it would be a disaster," said Alan Johnson, CEO of Johnson Associates.

Johnson's firm advises financial firms on compensation plans. With executive pay continuing to be a hot button issue, Johnson said firms would have a tough time explaining to shareholders, the public and the government why bonuses for their highest earners had to be pushed into 2012 from 2013 just because their tax rates might be going up a few percentage points. (Read More: Wall Street Expects Bigger Bonuses, but May Not Get Them.)

"Is it worth the wrath of the federal government?" Johnson asked. "No way."

If Congress fails to reach a budget deal by the end of the year, taxes for all income levels will go up. If there is a deal, tax hikes are likely to be focused on the highest earners, or families earning more than $250,000 a year.

While President Barack Obama has signaled he is flexible on the size of the increase, rates for the highest bracket could revert to levels seen during the Clinton administration when the top earners paid 39.6 percent on their income, up from 35 percent today.

Pay consultants and compensation attorneys told CNBC they had fielded a number of calls and questions from clients asking about how they might accelerate bonus payments and pay them in 2012, instead of the traditional schedule when payments are made in the first quarter of the new year. The experts said once the companies saw the hurdles they had to clear to do this, they backed off. (Read More: Bonuses on Wall Street Expected to Edge Up.)

Along with the public relations nightmare that might be created by accelerating bonuses, Doug Friske, Global Head of Executive Pay of Towers Watson, said there would be plenty of other issues a firm would have to address, most of them administrative in nature.

"There needs to be a legal analysis as to why you accelerate income," said attorney Andrea Rattner, head of the tax department at Proskauer Rose.

Certain pay may be eligible for acceleration, she said, but a change in the payment calendar may also require approval from a board's compensation committee.

"The idea of partial payment is out there," said Eric Hosken, a partner at Compensation Advisory Partners.

He said some firms asked about paying out a certain percentage of the bonus before the end of the year, but board members might be unlikely to approve the pay until they know how employees performed. Given many firms do not received their audited results for the year until the New Year, the directors are unlikely to take that risk, Hosken said.

There is also a question of timing. Large public companies have thousands of employees. Pay consultants said the administrative burden of sifting through pay plans and getting the money or stock into employees hands by Dec. 31 might prove to be an overwhelming task.

However, one pay adviser, who asked not to be identified, said he does expect a couple of mid-sized public companies to accelerate bonuses this year. The catch is, they will do it for executives below the C-Suite. This means the companies will not have to disclose the changes to the pay plans in their proxies, allowing them to avoid public scrutiny. (Read More: Jobs Growth? Not on Wall Street.)

There is one segment of Corporate America that is likely to get the checks out early to so their employees can save on taxes: private companies.

The issue may not be dead yet though. One adviser, who asked his name not be used, said if it looks like a budget deal will not be reached in the next couple of weeks, some companies may revisit the idea and try to get the money out, and under the high tax wire.

Update: This story has been updated to correctly name the company where Mr. Hosken works.