The silver lining in the election for Democrats 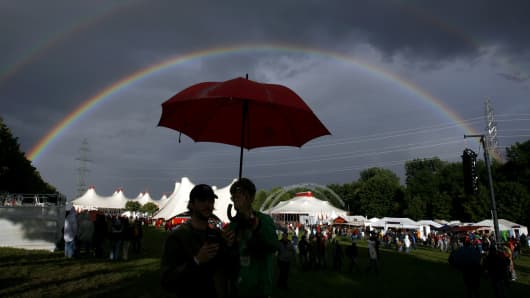 Tuesday's stunning election results underscored the deep economic uncertainty and scarring felt by voters across America. Frustration with the status quo reached the boiling point, and where people had a chance to vote for what they thought was change – they took it. That's as true of voter support for Donald Trump as it is of voters crossing party lines to approve four state ballot initiatives that raised the minimum wage for 2.3 million working Americans.

Make no mistake: Donald Trump won by dividing Americans and appealing to the worst impulses in people. His ugly campaign will have far-reaching consequences for the nation that we can't even begin to tally. But many working-class voters were drawn to Trump because of their well-founded belief that the rules of our economy are rigged against them. Americans are working too hard for too little. They know that they should be sharing more in the profits of their employers, and they are frustrated that the economic recovery is not translating into better jobs.

There's no better sign of that frustration than the minimum wage. Congress hasn't raised the federal minimum wage since 2009, and so this year voters in four states took matters into their own hands. The decisive wins demonstrated the breadth and depth of national support for action on wages. In Arizona, Colorado, Maine and Washington State, voters decisively backed minimum wage increases of $12 to $13.50 an hour. In red Arizona, voters in the City of Flagstaff also approved a $15 minimum wage, making it the first city outside of the coasts to join the Fight for $15.

In Maine and Flagstaff, voters also approved a gradual phase-out of the outdated and unfair subminimum wage for tipped workers – a give-away to the restaurant industry whose staying power is a testament to the lobbying clout of the "other NRA," the National Restaurant Association. As the first state and city to get rid of the tipped wage in 30 years, these historic votes create momentum for the "One Fair Wage" movement calling for national action to eliminate the subminimum wage for tipped workers.

"Congress hasn't raised the federal minimum wage since 2009, and so this year voters in four states took matters into their own hands. The decisive wins demonstrated the breadth and depth of national support for action on wages."

These ballot victories should be a wake-up call to Congress that voters are demanding bold action on the federal minimum wage and jobs, and workers have made clear that $15 is what they need to get by in all regions of the country. As leading Republican pollster Frank Luntz's firm, LuntzGlobal, has warned minimum wage opponents, "If you're fighting against the minimum wage increase, you're fighting an uphill battle, because most Americans, even most Republicans are okay with raising the minimum wage."

Forty-three cities and 18 states have raised their minimum wages since the Fight for $15 launched four years ago – raising pay for 20 million workers. As Goldman Sachs analysts summarized earlier this year, "the economic literature has typically found no effect on employment" when the minimum wage has increased. State-of-the-art research shows that, unlike small minimum wage increases, $15 minimum wages raise pay for as many as one-in-three workers.

Federal action on the minimum wage would require Republican support, but fortunately there are already signs of cracks emerging in Republican opposition. Ohio Senator Rob Portman, whose opponent Ted Strickland challenged him for keeping the minimum wage low, announced last month that he is now open to an increase.

Wisconsin Senator Ron Johnson was forced to abandon his opposition to the very existence of the minimum wage in the face of a challenge by Russ Feingold. And U.S. Rep. Ileana Ros-Lehtinen (R-FL) became the first Republican to back a $15 minimum wage, explaining that "Increasing the minimum wage is good not only for the worker, it is good for those companies that employ them." Even president-elect Trump, who initially said that "wages were already too high," changed his position to support a minimum wage increase.

Voters are right that our economy is rigged by the super-rich and corporate interests. The United States is the wealthiest country in the world, and our challenge and moral duty is to make sure it's shared more equitably. If president-elect Trump really believes that too, he'll work with Republicans and Democrats to put America's workers and families first by raising pay and enacting the kinds of policies our elected leaders were clearly put in office to achieve.


Commentary by Christine L. Owens, executive director of the National Employment Law Project Action Fund. She served as Director of Public Policy for the national AFL-CIO, the Democratic National Committee's American Majority Partnership director, and an attorney in private practice and the federal sector, representing workers in employment law matters. She is also a member of the board of the directors of the Coalition on Human Needs.