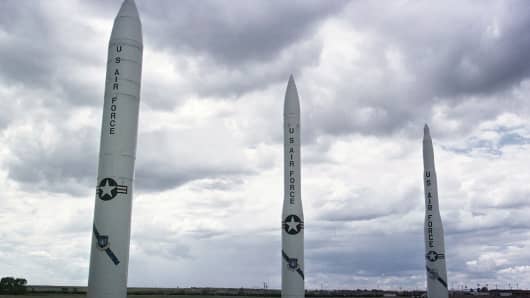 Getty Images
'Peacekeeper' missile, left, and two versions of the Minuteman missile sit at the entrance of Warren Air Force base July 11, 2001 near Cheyenne, WY.

Perhaps there is one pricey Washington program President-elect Donald Trump does like. Just a few weeks after berating Boeing for its high-priced Air Force One replacement program and Lockheed Martin for it's even more pricey F-35 fighter jet, Trump tweeted out what sure looks like his support for what could be the priciest defense project of them all: Replacing the U.S. nuclear missile arsenal.

The above statement hardly comes out of nowhere. First, the Air Force is starting the process of replacing America's Minuteman nuclear arsenal. More than 400 of those ICBMs, most built in the 1960s, now sit in missile silos across the U.S.

And, not coincidentally, the three companies bidding to get the replacement contract are Boeing, Northrop Grumman, and Lockheed Martin. Of course, the CEOs of Boeing and Lockheed just met with Trump in Florida yesterday. While Boeing came out of that meeting promising to keep the costs of replacing Air Force One below $4 billion, that's chickenfeed compared to the $60 billion to $86 billion estimated cost of replacing the Minuteman program.

Was some kind of quid pro quo discussed in Mar a Lago Wednesday? Perhaps we'll never know, but if Boeing gets the contract that will be a prevailing suspicion for years to come.

The Minuteman is just one part of the U.S. nuclear arsenal. President Obama has pledged to update the land-based Minuteman and also our submarine and bomber-based nuclear defenses at an estimated total cost of $1 trillion. In short, this update could end up becoming the costliest U.S. defense program of all time. And that is certainly saying something. As you'd might expect, there are those in Congress who are opposed to that cost and question the need for such an extensive update.

Trump's tweet certainly didn't say anything about how he'd be willing to pay any price to keep our nuclear arsenal state of the art, but he did say our nuclear capability should be expanded. That's a far cry from the defense project penny-pinching Trump persona that emerged in his tweets and public comments during most of the transition process.

This is the Trump who reminds us more of traditional Republican presidents, especially Ronald Reagan who used a U.S. defense buildup and European missile deployment to force the U.S.S.R. into an arms race that eventually brought the Soviet Union down. Or it could simply be that Trump wants to make a big show of cutting costs for programs he doesn't think are vital, like updating Air Force One, versus ones he thinks are more essential for our survival.

With the F-35 program pretty much a done deal, Trump's focus on America's nuclear weapons is significant in terms of cost and the projection of U.S. military might. Throughout the election and transition period, Trump has tried to project an image of a leader who can increase American strength while staying fiscally conservative.

Thursday's nuclear comments take what looks like a clear detour from the fiscal side of that image since Trump did not mention cost at all. But it may signal to everyone that when it comes to choosing strength or savings, Trump is likely to go with strength from here on out. 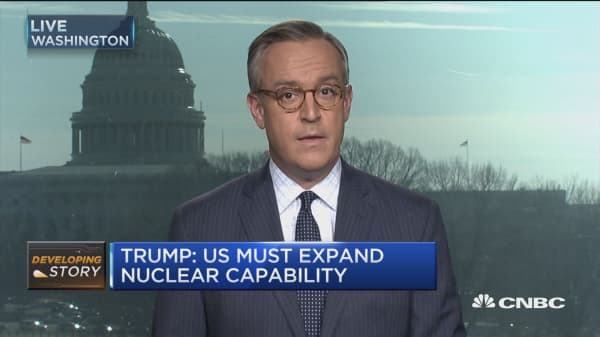