Skip Navigation
Millennial Money31-year-old makes $15,000/month as a voiceover artist and lives in a school bus
Megan Sauer|Zachary Green
Fired UpHow a Colorado couple retired at 40 and built a net worth of $1.5 million
Ryan Ermey|Lauren Shamo
Money30-year-old makes $114,000/mo in passive income: ‘4 businesses you can start for...
Charlie Chang, Contributor

Though Warren Buffett is worth almost $80 billion, the chairman and CEO of Berkshire Hathaway does not wear bespoke, couture suits from Italy.

In fact, though he has about 20 suits, each was made in China.

Buffett has a long-term relationship with the suit-maker and self-made entrepreneur behind Dalian Dayang Trands, Madam Li. Years ago, she took a risk, caught his attention and then won his respect.

As Buffett recalls on CNBC's "Squawk Box," his relationship with Madam Li began when two of her employees greeted Buffett at his hotel in Dalian, China, and started taking his measurements.

"They started sticking tape measures around me and everything and then they showed me a book with ... a whole bunch of samples and said, 'Pick out a suit. Madam Li wants to give it to you,'" says Buffett.

At the tailor's urging, he picked out two suits. She sent him those and then more.

Eventually, Buffett met the founder and was impressed by the way she had worked her way up, perhaps because it reminded him in some ways of how he did as well.

"She had started with a sewing machine," says Buffett. "And she employed 15,000 people. And she was a marvelous woman."

In 2009, in honor of Dalian Dayang Trands' 30th anniversary, Buffett recorded a video praising Madam Li and her entrepreneurial success.

"It's a remarkable achievement," says Buffett in the video. "It's a story that should inspire people in China and inspire people around the world. I have told that story to many people here in the United States and they marvel at what Dalian Trends has achieved over just these 30 years."

Buffett's business partner Charlie Munger and his long-time friend and fellow billionaire Bill Gates also have suits made by Madam Li. They count themselves among her satisfied customers.

Though Buffett is known for appreciating a good deal, he doesn't wear Li's clothes because they're free but because they're good. "The suits we have received have been made in China, we have never had to alter a quarter of an inch," Buffett says in the 2009 video. "They fit perfectly. We get compliments on them. It's been a long time since I got compliments on how I looked but, since I am wearing Madame Li's suits, I get compliments all the time."

In the years since Buffett has started wearing Li's suits, he has also become her friend. Buffett invited her to his annual shareholder meeting and Li has sent Buffett gifts.

"Thank you, Madame Li, thank you, Dalian Trends," Buffett continues, "for setting a marvelous example for what a business can accomplish in one person's lifetime." 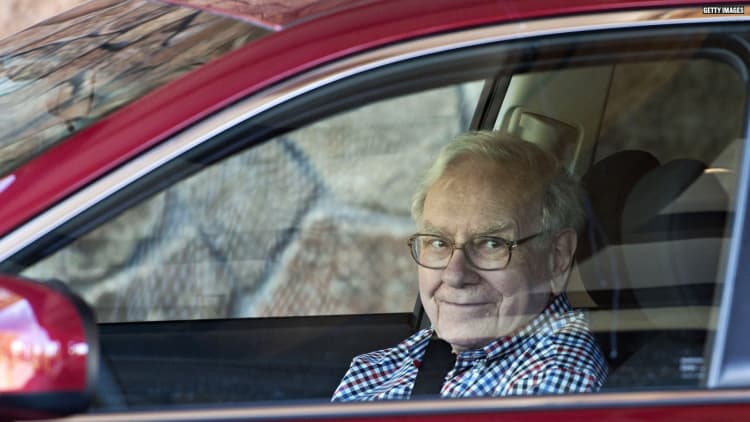 VIDEO0:5000:50
Warren Buffett keeps his breakfast under $3.17
The Definitive Guide to Business