A surprising number of CEOs played sports when they were younger. Former Whole Foods CEO Walter Robb was the captain of the Stanford Soccer Team. Hewlett-Packard CEO Meg Whitman played varsity squash and lacrosse at Princeton. Even Mark Zuckerberg was a high school fencing star. One Ernst & Young survey found that 96 percent of women in C-suite roles played sports.

After playing professional lacrosse for over 10 years and becoming the founder and COO of HEX, Drew Westervelt knows firsthand that sports can help you get ahead in business.

In fact without sports, HEX, a laundry detergent designed for the type of synthetic fibers athletic apparel is most commonly made from, would not exist today.

"In college all I was ever given was cotton," says Westervelt. "That has changed really rapidly over the growth of a lot of these athleisure brands in the last 10 to 15 years."

As a professional athlete, he found that his normal detergent was not adequately cleaning his new state-of-the-art gear. When there was an outbreak of MRSA in the locker room, he realized that detergents were not keeping up with the needs of today's athletes.

Westervelt worked with chemists and found that that not only did standard detergents fail to remove sweat particles on synthetic fibers, but the bacteria also actually increased post-laundry. Using his connections in the lacrosse community, he scored meetings with major retailers and today, HEX is sold in more than 4,000 retail locations nationwide.

His experience as an athlete served as his inspiration, and his teammates were vital networking resources — but Westervelt says it's the lessons he learned from years of practice, matches and training sessions that taught him to excel in business.

Here are 5 lessons he learned from sports that helped him succeed in business:

Whether you are launching a business or a sports career, Westervelt says it is crucial to think long-term. "Everything worthwhile takes time, and it often evolves and pivots," he says.

"The path from the inception of an idea to success and bringing it to life is full of challenges — just like training to be the best athlete and competitor you can be."

When HEX was in its earliest stages, Westervelt had to remain agile and shift his business plan, but by making sure his product was perfect before he went to retailers, he was able to set his business up for success.

"The worst thing in life is being unprepared," he says. "Implementing lessons learned is key to growth and being better moving forward."

Setbacks are inevitable in all areas of life says Westervelt. What is important is that you continue to chase your goals.

"In any endeavor, there are almost always significantly more valleys than peaks."

The key to persevering through hard times is to remain optimistic argues Westervelt, "Staying positive to keep driving forward is what the process is all about. Each challenge is a learning experience you can build from and grow from."

NBA star James Harden agrees with this theory. He told Time Magazine that the most powerful tool to overcome challenges in any kind of environment is to "always have a positive mindset."

"Bad things happen," he explains. "Do you bounce back now? Or do you just stay down there and allow it to take you down?"

Businesses, like sports, require teamwork. As an entrepreneur, it can be tempting to try and control every aspect of your business, but this is a recipe for failure says Westervelt. "You can't do it all — nobody can!"

The best way to set your business up for success is to work with people you admire, respect and trust. "Surrounding yourself with great people and identify team goals and metrics to achieve those goals is key."

This emphasis on teamwork is mirrored by some of the world's most successful entrepreneurs. Mark Zuckerberg once said, "No one does it alone. When you look at most big things that get done in the world, they're not done by one person, so you're going to need to build a team."

4. Ask for feedback — and listen

One of the most difficult parts of being an athlete is constantly being evaluated and critiqued by coaches and spectators. But during his athletic career, Westervelt learned that actively seeking out feedback will help you become the best player possible. He argues that this lesson holds true in business as well.

"Whether you're an athlete or business owner, customer feedback is similar to watching film of your performance," says Westervelt.

This kind of feedback is particularly valuable because of its honesty, he explains. "It doesn't lie. Constructive and real feedback is sometimes hard to listen to, but it always helps build stronger products or services. And it opens your mind to new and often differing opinions."

Sports are a terrific way to learn how to be a leader says Westervelt. "We all have roles in business or on the field."

The key to being an influential leader on the field and in the board room is to be self-assured. He says, "Believe in your ability and have the confidence to make your value be seen by actions to drive your team or business. Create a compelling case for why you or your business is needed and solves and a problem for consumers."

After playing sports for so long, Westervelt knows that it can be easy to let self-doubt slip into your thoughts, however, if you can push those thoughts aside, you are more able to focus on creating the best business possible.

He says entrepreneurs should "lead in your own way and believe in what sets you or your business apart." 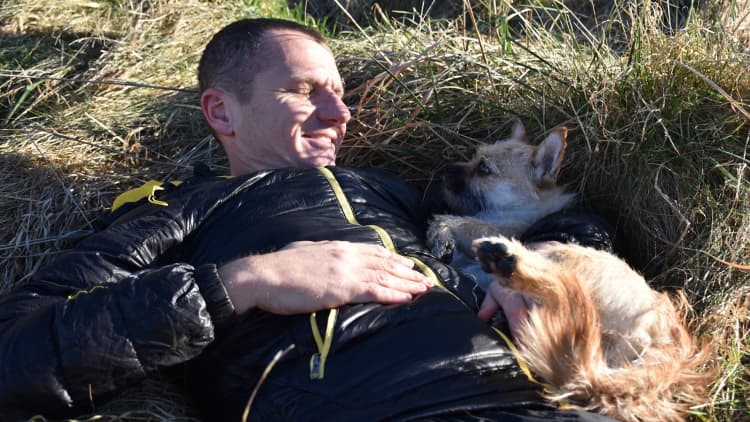 VIDEO0:0000:00
Develop your mental toughness with tips from an ultra-marathoner
Incredible Feats