Skip Navigation
Fired Up2 'downsides' of early retirement, according to a self-made millionaire
Ryan Ermey
SuccessWant to sound and feel more confident? Ditch these 11 phrases from your...
Kathy and Ross Petras, Contributors
MoneyThis mom makes $760K a year in passive income—and lives on a sailboat: 'I work...
Michelle Schroeder-Gardner, Contributor
Barack Obama, Michelle Obama, and daughters Malia (L) and Sasha (R) pose for a family portrait in the Rose Garden of the White House on April 5, 2015 in Washington, DC.
Handout | Getty Images News | Getty Images

Avignon, a small town in the Provence region of France, is known for its scenic landscapes, nearby vineyards and historic sites, like Palais des Papes, where the Pope lived in the 14th century.

And right now, the Obamas are visiting the town on a family vacation, according to local French newspaper Midi Libre. Former President Barack, Michelle and daughters Sasha and Malia arrived June 14 and checked into luxury vacation rental Le Mar des Poiriers, which rents for 55,000 euro ($62,000) a week, according to Midi Libre.

Take a look inside the vacation rental.

The 13,000-square-foot main house has seven bedrooms, and a separate cottage has two.

At least one bedroom in the main house has a chandelier and four-post bed.

There's an elegant salon with a chandelier and rug.

The property also has a tennis court, swimming pool and gardens, and it comes equipped with a culinary staff of two chefs and two waiters, according to the website.

Barack Obama has said traveling with his family is what makes a trip memorable. "Traveling now with my children is now what's most important," he said in April. "There is something spectacular about seeing a new place, being exposed to new ideas and experiencing a new culture. Traveling makes you grow. But as a parent, when you are able to watch that sense of discovery in your children's eyes? That is more special than anything else."

Google searches for "Avignon" have increased since the Obamas arrived last week. "Avignon" reached its highest peak for searches since June 2018.

This is the No. 1 dream destination for American travelers — and it's not Hawaii or Italy 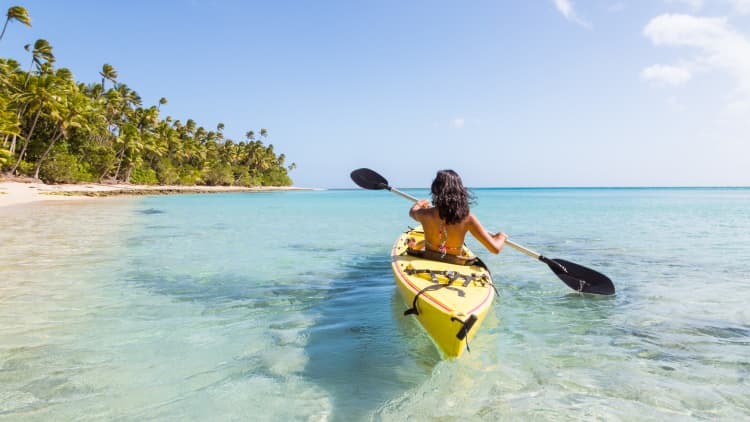