Goldman Sachs announced this morning that David Solomon will become its next chief executive. The announcement formally establishes Solomon as the successor to current CEO Lloyd Blankfein, who will retire at the end of the year.

The move comes just months after the company tapped Solomon to be its sole president and chief operating officer, edging out former co-president Harvey Schwartz. However, a formal announcement of his new role was not expected until the fall, The New York Times reports.

While Solomon, 56, may spend his days at the helm of one of the world's most powerful investment banks, he also has a surprising hobby: disc jockeying.

Under the moniker "DJ D-Sol," Solomon spins dubstep records at elite clubs all over the world. In January he spun records at trendy New York hotspot Up&Down. His Fleetwood Mac remix was featured on SiriusXM. According to his Instagram account, his most recent gig was in mid-April, to help raise awareness about opioid addiction,

His DJ-ing has even taken him to the Bahamas, where he rang in the New Year. Six months prior, he performed for beach revelers celebrating Independence Day at an outdoor bar called Nipper's. "Great fun this weekend spinning at Nipper's in Great Guana Cay," he wrote on his Instagram. "Beautiful day and fun crowd celebrating the 4th."

Last September, the financier joined a roster of DJs performing at the MTV Europe Music Awards hosted in London. "Great night and a great show," he wrote.

In March, the CEO teamed up with SiriusXM DJ and producer Liquid Todd to perform at the ritzy W Hotel's outdoor pool party in downtown Miami.

To demonstrate just how seriously he takes his craft, Solomon posted a photo on Instagram with the caption, "Starting to play around with vinyl. Old school and lots to learn but very cool." These days, most DJs use either laptops or digital turntables.

The banker has also been photographed with notable musicians like rapper Sean Combs and discussed the entertainment business with talent manager and record label owner Scooter Braun at the Goldman Sachs Innovators Summit last fall.

"David's always believed that having a wide range of outside interests leads to a balanced life and makes for a better career," Goldman spokesman Jake Siewert told The New York Times last year. "He's preached that regularly to younger employees in the firm and tries to lead by example."

Though it's unclear whether Solomon is paid for his musical performances, he's probably not in it for the money.

According to career site Payscale, the average DJ makes roughly $40 an hour. By comparison, Solomon receives an annual salary of $1.85 million and annual variable pay, according to Fortune. Plus, filings show that he received $10 million worth of restricted stock in early January.

Now that Solomon has been named CEO, his pay will likely be closer to Blankfein's, whose base salary was $2 million in 2017, but who received a total compensation of $24 million.

This is an updated version of a story that appeared previously. 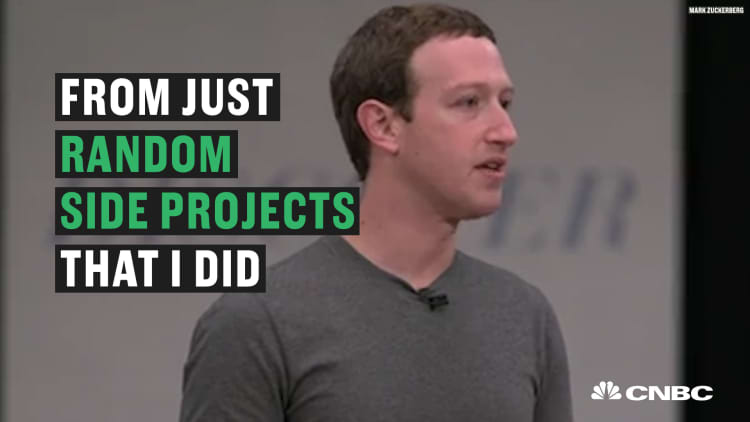 VIDEO0:5500:55
Zuckerberg: Having a hobby can make you better at your job
The Definitive Guide to Business