While former U.S. president Barack Obama says 2017 has been a tough year, there's a lot to be optimistic about heading into the new year.

In a interview hosted by Prince Harry of the U.K. royal family for BBC Radio 4, the two acknowledge that this year has been trying for many who have concerns about the future.

Though the 44th president says he doesn't think in terms of one year, he tells Prince Harry that we should still be optimistic about what's to come in 2018 because we live in a more advanced world.

"I can tell people what I genuinely believe, which is that if we take responsibility for being involved in our own fate," he says, "if we participate, if we engage, if we speak out, if we work in our communities, if we volunteer, if we see the joy that comes from services to others, then all the problems that we face are solvable."

Despite all the terrible news that we read, see and hear, and despite all the "genuine cruelty and pain and hardship that people are experiencing all around the world at any given moment of any given day," says the former president, "if you had to choose a moment in human history in which you'd want to be born, ... you'd choose today."

Even if you didn't know ahead of time whether you were going to be a Prince Harry, a Barack Obama or a small child in rural Africa or India, you would still choose to be born during these difficult times, he says.

The former president explains why. "The fact is, the world is healthier, wealthier, better educated, more tolerant, more sophisticated and less violent than just about anytime in human history."

Let's use education as an example. According to co-authors of the "Global Rise of Education" Max Roser and Esteban Ortiz-Ospina, there has been a huge expansion in education in recent times. Global literacy rates have been climbing due to increasing rates of enrollment in primary education and the global average years of schooling is much higher now than a hundred years ago.

There have also been sweeping movements within the last decade promoting more tolerant views and wider acceptance such as the gay rights movement, as well as campaigns against violence and systemic racism through groups like Black Lives Matter.

And although women still have ways to go in securing senior-level positions in the workplace and wages that they deserve, there has been an increase of women in high-ranking positions at companies like IBM, Facebook and Tesla.

"You think about the history of the United States," Obama continues. "It was only a few generations ago where someone who looked like me was in bondage, or if not in bondage, then servitude."

It was also just a few generations, he says, where women couldn't aspire to anything beyond caring for their children and tending to the home. This is "the most noble thing you can do," he adds. "But I want my daughter to be able to do other things, and they can do other things now while still raising a family."

However, Obama notes that history doesn't just run forward but also backwards and sideways, which requires us to continually push onward.

"When you think about the strides that we've made just in my lifetime," he says, and "when you think of how much has changed and how much has gotten better, well then that has to make you optimistic, as long as you don't start thinking that any of us can sit back passively and assume it continues."

Barack Obama on success: Not a marathon or sprint, but a 'relay race'

Michelle Obama: 'It's okay to be bossy' 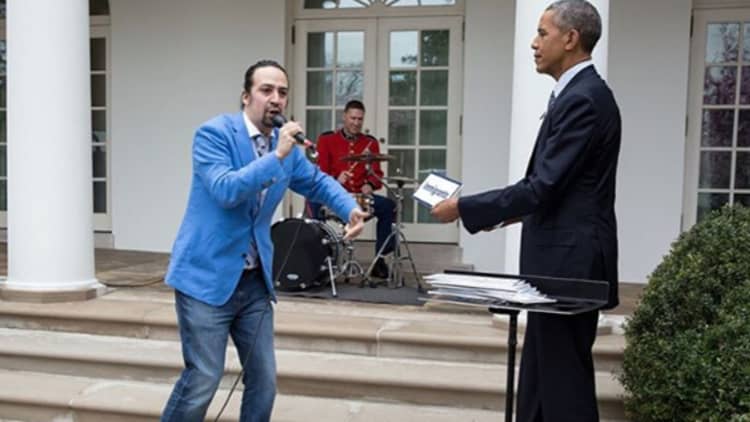