What age should young adults be financially independent? The majority of Americans say 22, according to a new analysis from the Pew Research Center. But the same report finds that less than a quarter actually are by that age.

Pew analyzed Census Bureau data to find that just 24% of young adults could be considered financially independent by 22, compared to 32% in 1980. Financial independence is defined as earning an annual income of at least 150% of the federal poverty level. Pew also found that 45% of adults between the ages of 18 and 29 say they receive financial help from their parents, while 59% of parents say they support their adult children.

Recurring expenses like groceries, tuition and housing costs are the most commonly covered by parental aid, as this chart shows. 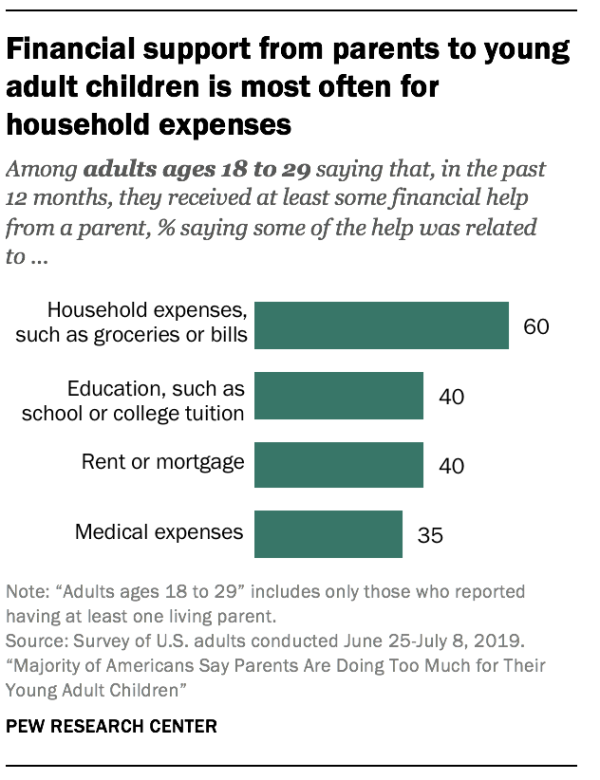 The report also noted the long-term trend of young adults putting off major life milestones, like getting married and buying a house.

How to become more financially independent

There's nothing inherently wrong with getting financial support from your parents if they are willing to give it, can afford to give it and you really do need the help, Greg McBride, chief financial analyst for Bankrate.com, tells CNBC Make It. Particularly given the economic difficulties facing young adults today, like ever-increasing student loan debt, low wages and astronomical housing costs.

Still, if you want to strike out on your own, the obvious first step to any sort of financial independence is securing a full-time job. McBride says it's fine — even smart — to keep living with your parents when you start working, if you are able to and they don't object. That way, you can begin saving up for your eventual "launch."

Just make sure you're pitching in, Erin Lowry, author of Broke Millennial: Stop Scraping By and Get Your Financial Life Together, tells CNBC Make It.

"That could be buying groceries for the family, or at least yourself," says Lowry, or paying some amount of rent. "If you're not working right now and can't financially support yourself or contribute [to the household], think of other ways you can be helpful to your parents, like picking up siblings from school, cooking meals or cleaning up around the house."

As you're doing that, you can start working on your own finances. To move out on your own, you need enough money to cover first and last months' rent and a security deposit (typically an additional month of rent) to secure your own apartment. Start researching housing in your area to get a sense of how much you can expect to spend each month.

"You'll need to cover all the start-up expenses, like buying furniture," adds McBride. "And you'll need emergency money for unplanned expenses, really for the first time in your life."

Most financial advisers suggest stashing away three to six months' worth of expenses in an emergency fund. But if that seems unrealistic, you'll have to make your own calculation: How much savings do you need to be comfortable in your new place, on your own? Consider your monthly bills, rent, insurance, grocery costs, etc., and how you can make those expenses work on your monthly salary.

"Another key ingredient of financial independence from your parents is to pay all of your own bills," says McBride. "You have to calibrate your expenses with your income."

For some tips on how to save, check out these CNBC Make It resources:

Don't miss: If you're afraid to invest in the stock market, do this calculation to see how much money you're losing out on