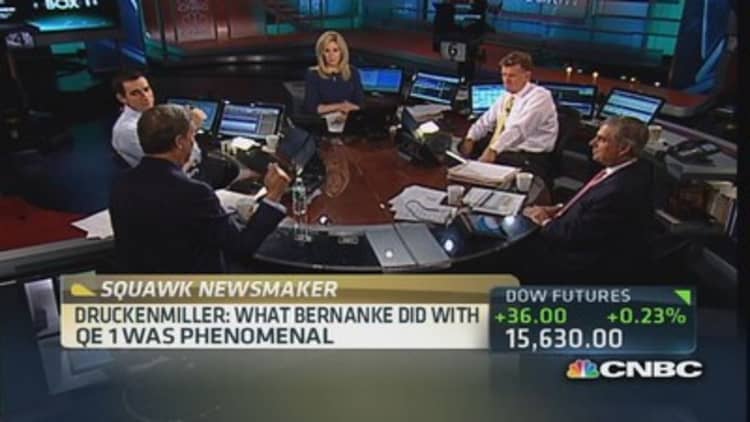 The Federal Reserve isn't just inflating markets but is shifting a massive amount of wealth from the middle class and poor to the rich, according to billionaire hedge fund manager Stanley Druckenmiller.

In an interview on "Squawk Box," the founder of Duquesne Capital said the Fed's policy of quantitative easing was inflating stocks and other assets held by wealthy investors like himself. But the price of making the rich richer will be paid by future generations.

"This is fantastic for every rich person," he said Thursday, a day after the Fed's stunning decision to delay tightening its monetary policy. "This is the biggest redistribution of wealth from the middle class and the poor to the rich ever."

"Who owns assets—the rich, the billionaires. You think Warren Buffett hates this stuff? You think I hate this stuff? I had a very good day yesterday."

Druckenmiller, whose net worth is estimated at more than $2 billion, said that the implication of the Fed's policy is that the rich will spend their wealth and create jobs—essentially betting on "trickle-down economics."

"I mean, maybe this trickle-down monetary policy that gives money to billionaires and hopefully we go spend it is going to work," he said. "But it hasn't worked for five years."

Economists and academics are divided on whether the Fed's policies have truly helped the rich at the expense of the rest of America. Many point out that the policies have lowered interest rates for all Americans, which have helped boost housing sales and values. They also say unemployment and the economy would be a lot worse if the central bank didn't continue its huge monthly bond purchases.

Yet others say the policies have mainly juiced asset prices—and the wealthy hold most of the assets. There is no reliable data on the wealth of the top 1 percent for the past two years, when markets have surged. But as of 2010, the mean and median net worth of Americans was still down 50 percent from the precrisis peak, mainly because of the decline in home values, according to Edward Wolff, an economics professor at New York University.

The top 1 percent of Americans hold 35 percent of the nation's wealth—up slightly since 2007. The top 10 percent own more than 80 percent of all stocks and more than half of all individual financial assets in the U.S., according to the Federal Reserve and Wolff.

A stream of new data on inequality also suggest that the gap between the wealthy and the nonwealthy is growing, largely becaue of rising stock markets. New data from Emmanuel Saez, an economist at the University of California at Berkeley, found that the top 1 percent captured 95 percent of the gains during the recovery.

According to the Census Bureau, incomes for the middle class have largely remained flat while the wealthy have gained. The income top 10 percent earns nearly 12 times as much as the bottom 10 percent, up from a little more than 10 percent in 1999.

A recent report from The Associated Press found that unemployment remains much higher for the middle and lower classes than for higher-income groups.

The wealth of America's top 400 billionaires grew by $300 billion in the past year, hitting $2 trillion, according to Forbes.

A study by the Bank of England found that its quantitative easing policies—akin to the Fed's—were mainly helping the wealthy. It found that 40 percent of the gains from easing went to the top 5 percent of British households.

Economist Anthony Randazzo of the Reason Foundation wrote last year that QE "is fundamentally a regressive redistribution program that has been boosting wealth for those already engaged in the financial sector or those who already own homes, but passing little along to the rest of the economy. It is a primary driver of income inequality."

And then there's Donald Trump—not usually one for distributional analyses of monetary policy. He said on CNBC last year that "people like me will benefit from this."