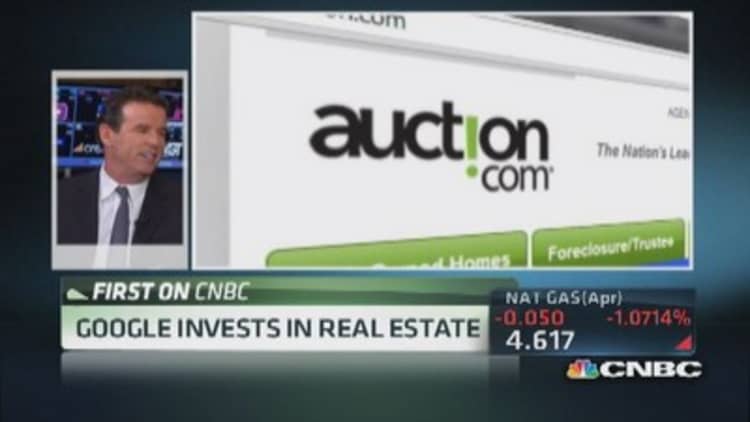 Google is using its sizable power and cash to put a real estate company on the map. Google Capital, a fledgling venture capital arm of the Internet behemoth, announced Wednesday it is investing $50 million in Auction.com, a growing online real estate marketplace.

"Auction.com has quietly built one of the largest marketplaces on the Web," said David Lawee, a partner at Google Capital, which launched last year. "We think Auction.com can fundamentally change how real estate, and particularly commercial real estate, can be bought and sold, leveling the playing field for smaller investors."

Google Capital invests in companies already in their later growth stage, unlike Google Ventures, which focuses on early stage companies. Auction.com, which sells properties directly from its site through an auction process, has already built a strong business. More than $7 billion of commercial and residential real estate traded through the site in 2013, and the hope is that this infusion will expand that business exponentially.

"Google was number one on our list," said Jeff Frieden, CEO and co-founder of Auction.com. "This will give us an opportunity to tap into their deep expertise in digital marketing and mobile, as well as in building world-class products."

(Read more: Something is out of whack for housing, and it's not all this snow)

As for Google Capital, sources there say this is a pure-play investment. While Auction.com has access to vast amounts of real-time data on residential home sales and pricing, there will be no product integration. Google is most interested, in fact, in Auction.com's commercial real estate sales, where activity is robust and revenue potentially greater.

Google Capital has also invested in Survey Monkey, Lending Club and Renaissance Learning, all companies that use technology to disrupt and innovate in their fields.

Google joins other shareholders in Auction.com, including Starwood Capital Group, Starwood Property Trust, Stone Point Capital and funds managed by affiliates of Fortress Investment Group. As part of the agreement, one representative of Google Capital will join Auction.com's board of directors and another will take a so-called board observer position, according to a statement.