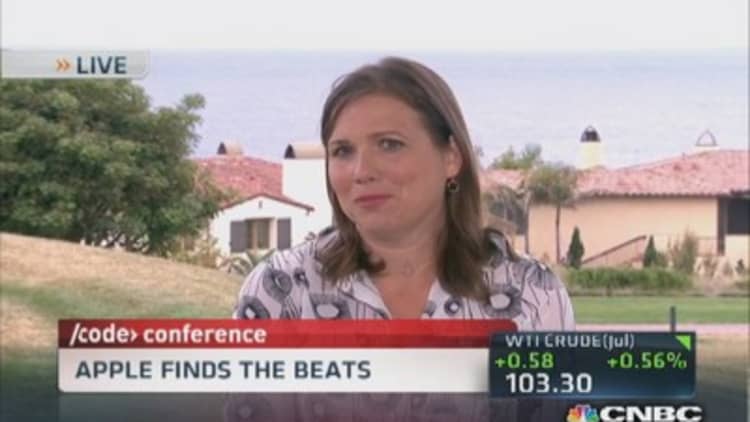 Beats co-founders Iovine and Andre "Dr. Dre" Young are extraordinarily well-connected with artists, and Apple is the music industry's largest retailer. Combining those forces to create a content distribution hub could boost Apple's bottom line income on iTunes and guarantee it a position in the fast-evolving music industry.

But so far, analysts simply aren't buying it. "I extremely, highly doubt it," says Daniel Ernst of Hudson Square. "Apple has a pretty firm track record and approach to not owning content. They've been a great partner of the music industry. Going out and becoming their own label is only going to hurt that relationship, rather than continue to help it."

Beats headphones are sold along side iPods in an Apple store.
Getty Images

"I would highly doubt Apple would start a traditional record label to sell music through their stores," adds Rob Cihra of Evercore. "That seems way too pedestrian and risky. They don't want to own a small piece of the industry; they want to dominate the distribution in that industry."

That said, distribution seems to be a growing concern for Apple. Digital music sales decreased for the first time in 2013. According to Nielsen SoundScan, digital single track sales fell 5.7 percent, to 1.26 billion units, from 1.34 billion units. (Digital album sales were largely flat.)

That's hardly a free fall, but analysts said it was enough to turn heads at Apple as subscription services cannibalized iTunes sales. (IFPI, the International Federation of the Phonographic Industry, notes revenue at those subscription services were up 50 percent last year, to $1.1 billion.)

Analysts say Beats' streaming service was part of what made the deal appealing, as well as Iovine's vision in this field. Considered a hip-hop pioneer, Iovine co-founded Interscope Records in 1989, which became home to rap artists such as Eminem, Snoop Dogg, 50 Cent and other genres such as rock group U2.

"Iovine was one of the first industry executives to anticipate the download business' decline and advocate for subscription and streaming services as music's future," notes Amit Daryanani of RBC Capital Markets.

But few industry observers believe Wednesday's deal was just about streaming music, or the company's headphones, for that matter. 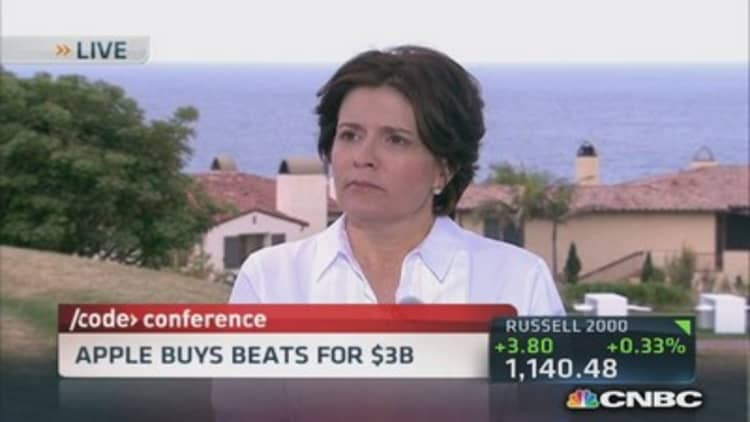 "What's the future spark that comes out of this deal?" asks Cihra. "I think by bringing Jimmy Iovine and Dr. Dre into the mix, that makes you think it's the next thing we don't even know of yet. That's probably what Apple is bringing them in for. It could be a record label, it could be a lot of things. I honestly have no idea."

That's the thing about Apple. Its history shows that anything is possible. After all, 15 years ago, the idea that Apple would open a music retail store and completely revolutionize the industry seemed absurd. But since opening its doors in 2003, iTunes has sold more than 25 billion songs.

Mark Mulligan, co-founder and analyst of Midia Consulting, suggests Beats could be run as a wearable tech division at Apple, with Iovine and Dre playing a role there. Others predict Apple might leverage Iovine's fabled negotiating skills (said to be on par with Steve Jobs') to drive content deals for the long-rumored Apple TV. Starting a record label, he said, isn't 100 percent out of the question, but he can't fathom why Apple would do so right now.

"There is not much of a business case—they get what they need from music by being a retailer service," he said. "It would have to be a vanity project, like the rich benefactor of a crumbling newspaper empire... They would be exposing themselves to risk in a business that has shrunk globally every year since 2000."

—By Chris Morris, Special to CNBC