Electric car maker Tesla will open up its patents "for the advancement of electric vehicle technology," CEO Elon Musk said on Thursday.

"Tesla will not initiate patent lawsuits against anyone who, in good faith, wants to use our technology," he said in a blog post.

Earlier this week, Engadget first reported that Musk plans to encourage standardized electrical car specifications by opening Tesla's Supercharger system to other automakers. The Supercharger allows Tesla drivers to charge half the car's battery life in about 20 minutes.

Thursday's announcement appeared to be much broader than just the charging stations, though. The move would include all current and future Tesla patents, Musk said.

"We believe that Tesla, other companies making electric cars, and the world would all benefit from a common, rapidly-evolving technology platform," he said in his blog.

Investors should not worry about the decision hurting the company financially, Musk told reporters in a conference call.

"It doesn't really harm Tesla but helps the industry," Musk said on the call, "and I think actually it will help Tesla, mostly with respect to attracting and motivating the world's best technical talent."

Click here to see how Tesla stock is trading. 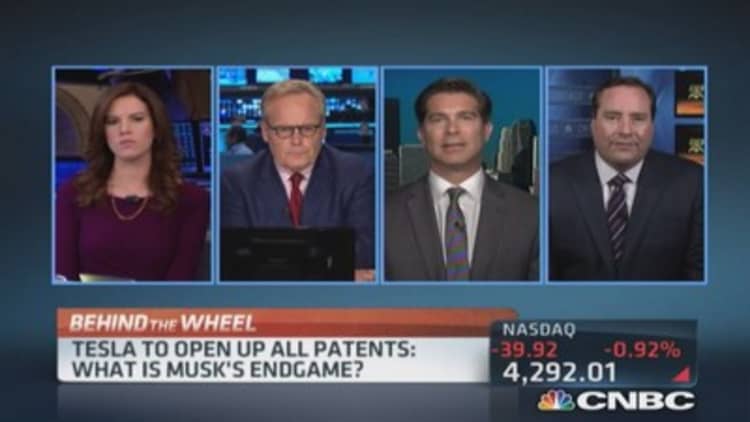 Musk's goal is to spur electric vehicle development by his competitors. The theory is that if other automakers can piggyback on Tesla's knowledge to build new models or technology that creates greater demand for electric cars, eventually Tesla will benefit by being able to sell more of its vehicles.

Last year, just 96,000 electric vehicles were sold in the U.S., less than one percent of the industry's total sales of 15.6 million vehicles.

Even Musk, perhaps the biggest cheerleader for electric vehicles in the U.S., admits he's disappointed with the lackluster pace of sales and EV technology.

"I thought things would be much further along than they are," he said. "We unveiled the roadster in 2007 with a 250-mile battery range and it has been seven years, and there is no other electric car in production with that range level. That's not great."

Recently, Musk said at the company's annual meeting he plans to stay at least another four to five years as Tesla's CEO. Musk also said that Tesla will not pick a final site for its long-awaited "Gigafactory" until the end of the year. The goal of the plant is to mass-produce lithium-ion batteries and lower their cost.

Read MoreMusk: I will remain CEO for at least another 5 years

— By CNBC.com staff and Phil LeBeau, with Reuters