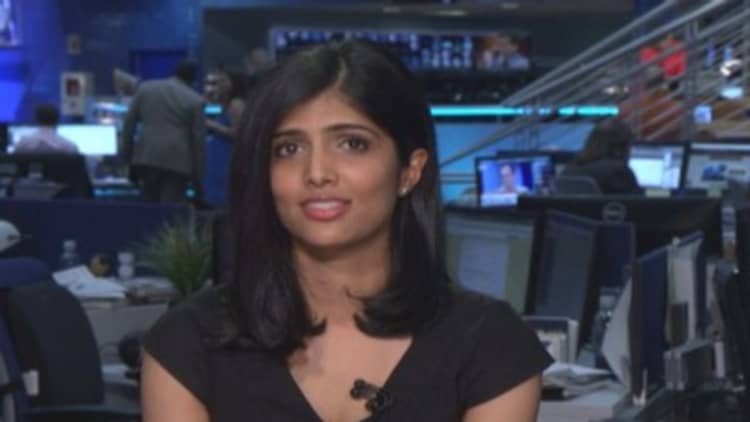 Some bankers are trading in their pinstripes and sporting new hoodies.

In May, Anthony Noto, head of Goldman's technology, media & telecom group, said he would be leaving the bank to join hedge fund Coatue Management. Flash forward a mere two months to July, and Noto surprised the Street by accepting the CFO job at Twitter.

Noto's not alone. An increasing number of finance professionals and business school students are flocking to tech jobs, leaving their banking careers behind.

"Since the financial crisis, finance as a status career has diminished and the relative attractiveness has shifted significantly in favor of tech," said Adam Zoia, CEO of search firm Glocap Search.

Tech is the third-ranked industry for full-time accepted offers, according to The Wharton School, the business college of the University of Pennsylvania, with 13.5 percent of 2014 grads accepting positions in the industry.That figure has rapidly grown from 5.6 percent in 2008. At Harvard Business School, 18 percent of the 2013 class went into tech, up almost threefold from 2008.

And it's not just new MBAs who are choosing tech—it's also people already started in banking who are switching. Cathy Li left Barclay's restructuring group to join Gilt Groupe in 2009.

"Within the first two months, I knew I didn't want to stay," Li said. While she enjoyed the work, it's the culture that pushed her away.

"The guys seemed to have more of a bond. I didn't have a mentor, I seemed lost," she recalled.

Tapping into her network of contacts, Li reached out to a friend at Gilt Groupe who wrote online descriptions for sweaters.

"I thought if he could enjoy doing that, it was probably a good company to work for," Li joked. She applied for a position and was initially turned down, but continued to develop relationships, finally joining as a product manager.

But walking away from a highly sought and predictable salary is not always easy. Aside from income sacrifices, there are perceptions that bankers don't have the right industry experience, or that their style of working will disrupt the creative culture in places like Silicon Valley. But as more and more ex-bankers join tech firms, it is clear that these perceptions may not be true.

"Start-ups desire business people, as their skills are an important asset to grow their companies," said Matt Mickiewicz, co-founder of Hired, an online jobs marketplace where companies can bid on talent. "Their ability to do market-sizing and devise strategies to build businesses and drive revenue [make them] more in demand, especially if they are post-MBA."

Stephen Robert Morse, co-founder of SkillBridge, a company that matches bankers and consultants with firms for short-term projects, agreed.

"The idea of people who are very talented at Excel and can crunch data, is a skill that start-ups need," he said. "They want people to use data to increase their customer base and sales and make operations more efficient."

Even more established firms, such as LinkedIn, have increased new hires from finance and consulting.

"We definitely have good traction of success [with these hires]," said Brendan Browne, LinkedIn's senior director of global talent acquisition. He cited their "ability to put structure around business problems, draw meaningful value from data and communicate these insights," which is core to LinkedIn's strategy.

Those candidates are placed beyond "finance groups" to business operations, corporate development and sales, a pattern Brown notes that was not traditionally seen five to 10 years ago.

Similarly, Gilt hired Li to conduct website analytics, identify metrics and solve business challenges, valuing her problem-solving skills and creativity. However, just a few months earlier, it was only looking for sales people and engineers. "If you couldn't sell or make something, they weren't interested in talking to you," Li recalled. Companies tend to go through a lot of money in the early stages and then realize they need to be smart about it. "Gilt wasn't being analytical enough," she said.

Top tech companies such as Google, Facebook and Amazon have all expanded their MBA recruiting efforts and are offering salaries that are competitive with traditional finance jobs.

At top business schools, the reported starting salary for MBA full-time hires at financial services firms and technology firms is comparable. At early stage firms, where salaries may not be as high, there are frequently opportunities for equity share, which can be an attractive draw for young, risk-taking professionals.

Read MoreWall Street may use computer games to find talent

Additionally, the tech industry lures people by offering more than just attractive dollars. As these tech firms grow rapidly, they allow their employees to be more creative and gain more exposure. At LinkedIn, summer associate Audrey Zhou is working on a project focused on the company's acquisition of Newsle, even getting the opportunity to interact and present to CEO Jeff Weiner and co-founder Reid Hoffman.

—By Trusha Chokshi, special to CNBC