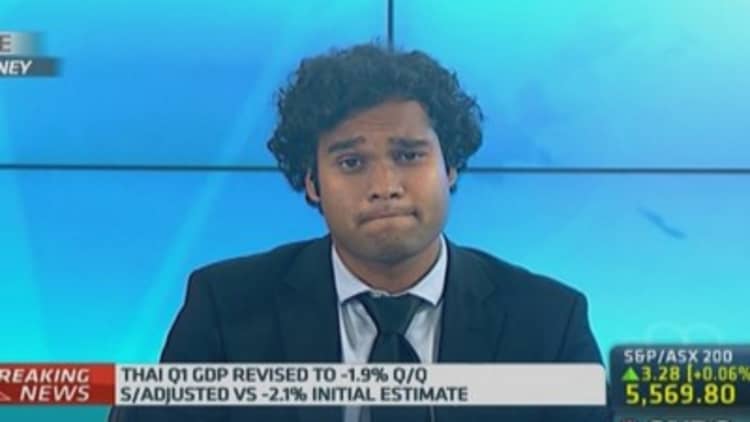 Thailand's economy avoided recession in the second quarter, data from the state planning agency showed on Monday, even as the Southeast Asian nation grapples with a political crisis that has hit consumption, confidence and tourism.

On a year-on-year basis, the economy expanded 0.4 percent, compared with a Reuters foreast of 0.3 percent and after contracting a revised 0.5 percent in the first quarter.

The government cited improved exports, eased political tensions and resumption of public spending plus a pick-up in consumer and business confidence as reasons for growth in the second quarter. But it narrowed 2014 GDP growth targets to 1.5-2.0 percent, from an earlier projection of 1.5-2.5 percent.

The Thai baht hit a three-week high against the dollar on the news, rising as much as 0.2 percent to 31.78 per dollar.

According to Krystal Tan, Asia economist with Capital Economics, the military coup in May helped to stabilize the economy.

"The junta has made spurring the Thai economy one of its top priorities since coming to power," she said.

"Its moves to delay tax hikes, accelerate budget disbursements and clear the way for investment approvals to resume should help support domestic demand. In particular, a 2.4 trillion-baht infrastructure spending program that will run through to 2022 has raised hopes of an economic revival," she added.

The Thai army seized power on May 22, in a bid to end months of tensions between key political parties which have sparked country-wide protests.

Read MoreTime to take money off the table in Thailand?

Still, some pillars of the Thai economy remain shaky. Consumption is subdued and auto sales are tumbling. The country's key tourism sector remains weak, with the number of tourists down 10.9 percent in July from a year ago.

"We still think there's considerable weakness in the Thai economy, particularly in consumption and investment," said Fred Gibson, associate economist at Moody's Analytics. "There's been a lift in consumer sentiment as the coup has brought a little bit of political certainty but over the long term the military junta rule isn't sustainable."

"The ongoing political uncertainty is weighing on investment spending as both domestic and foreign investors remain uncertain over long term and near term outlook. There have been international calls to return Thailand to democracy as a foreign investor, the political outlook has no certainty," he added.

Read MoreThailand's crisis: What you need to know

"We think the BoT has come to the end of its rate-cutting cycle and will keep rates unchanged at September's policy meeting," analysts at Barclays said in a note.

"With policy settings already very accommodative, and expectations of the economy improving at the margin, we think the next move will likely to be a hike, but only in 2015," the note added.