U.S. business investment spending plans fell for a seventh straight month in March, likely weighed down by a strong dollar and lower energy prices, suggesting the economy could struggle to strongly rebound from the first quarter's soft patch.

The dour report from the Commerce Department on Friday came on the heels of lukewarm data on retail sales, employment and housing starts that have hinted at insufficient growth momentum that could prompt the Federal Reserve to delay raising interest rates until later this year.

"Orders were weak across the board, remaining consistent with a sluggish rebound in growth following the early-year slowing in economic momentum," said Gennadiy Goldberg, an economist at TD Securities in New York.

Read MoreThere's a major problem with the GDP numbers

The dollar extended losses against a basket of currencies after the report, while prices for U.S. government debt rose.

Business spending on capital goods has been undermined by the buoyant dollar, which has eroded overseas profits of multinational companies.

At the same time, lower energy prices have cut into domestic oil production, reducing demand for equipment by oil-field companies, including Schlumberger and Halliburton.

Schlumberger, the world's No.1 oil-field services provider, cut its capital expenditure plans for this year by about $500 million to $2.5 billion. Halliburton slashed its capex by about 15 percent to $2.8 billion.

The strong dollar and reduced capex spending by oil-field firms combined with a harsh winter and softer global demand to slow U.S. growth at the start of the year.

The dollar has appreciated 12.1 percent against the currencies of the United States' main trading partners since last June, largely driven by expectations of tighter monetary policy. Procter & Gamble, the world's largest household products maker, on Thursday reported a 8.3 percent decline in quarterly sales, which it blamed on the dollar.

In March, shipments of core capital goods—which are used to calculate equipment spending in the government's gross domestic product measurement—fell 0.4 percent after a downwardly revised 0.1 percent gain in February.

Shipments in February were previously reported to have risen 0.3 percent. That downward revision together with March's weak reading could see economists trim their first-quarter GDP growth estimates, which currently range between a 0.5 percent and 2 percent annual pace.

A surge in transportation equipment buoyed overall orders for durable goods—items ranging from toasters to aircraft that are meant to last three years or more—which rebounded 4.0 percent last month.

That was the largest increase since July last year and followed a 1.4 percent decline in February. 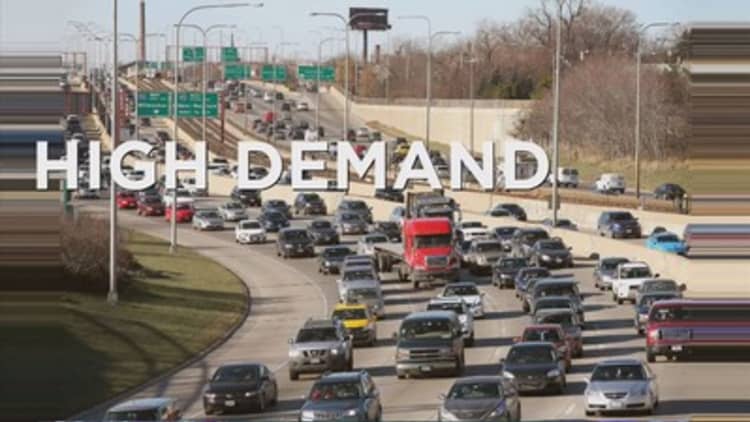