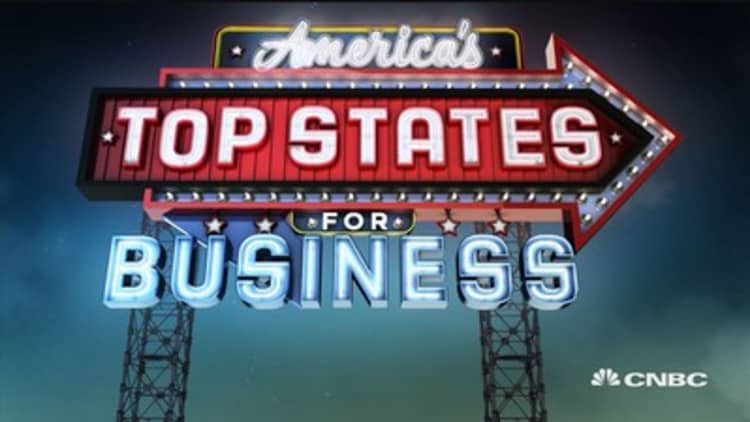 More than 9 million Americans are unemployed, according to the Labor Department, and many more are underemployed. Yet in a recent study by CareerBuilder, more than half of the employers surveyed said they had open positions for which they could not find a qualified applicant. It's not that those workers don't exist somewhere, the experts say. It's just that they're not necessarily located near the employers who want to hire them.

Experts have a term for this mismatch between jobs and the people to fill them: the skills gap. And it's a big reason that the new prime battleground among America's Top States for Business—and every other state for that matter—is which state offers the best workforce.

But what makes a good workforce? Having plenty of available people is a start, but only a start.

"Beyond measuring labor supply and demand indicators, assessing a region's degree of skill-set specialization is critical in order to effectively scale operations to the desired headcount," wrote site-selection consultant Keith Gendreau of Cushman & Wakefield in the trade publication "Area Development" this year.

It's a long and fancy way of saying that you can't close the skills gap without ... well, skills.

Because of that, businesses are increasingly considering the education level of a state's workforce when deciding where to locate. But even that has become more complicated these days, according to Daniel Marschall, a policy specialist with the AFL-CIO who has been studying workforce development for more than 30 years.

"There's been an expansion of interest in this area that I've never seen in my professional life," he said.

He says business leaders and policymakers are finding it is no longer enough to consider how far a region's workforce went in college. He said a focus on "four-year college for all" that began in the 1970s "is not serving the needs of our economy anymore." The result, he said, has been a generation of well-educated baby boomers who are now retiring "and taking their skills and knowledge with them."

So employers are increasingly looking at the availability of state-sponsored training programs and apprenticeships to develop the local workforce, better aligning the workers' skills with their needs. A new federal law is aimed at streamlining the process.

President Barack Obama signs H.R. 803, the Workforce Innovation and Opportunity Act, on July 22, 2014, in the South Court Auditorium of the Eisenhower Executive Office Building, next to the White House in Washington, D.C.
Kevin Winter | Getty Images

Last year, in a rare display of bipartisanship, Congress overwhelmingly approved the Workforce Innovation and Opportunity Act, the first update of federal workforce policy since 1998. The law includes some $3 billion in funding for worker training and seeks to give new autonomy to the states in creating "job-based" programs. But the law also includes new accountability and reporting requirements that will make it easier for businesses to evaluate the workforces in states they are considering.

Unions see an opening in the new push toward targeted training, becoming clearinghouses for companies seeking qualified workers, and even helping to fund specialized training programs as part of collective bargaining agreements.

They point to successful partnerships, like an 18-month industrial manufacturing technician apprenticeship program in Wisconsin. Employers—including Harley-Davidson, GE Medical Systems and Ocean Spray—craft the curriculum, the workers are guaranteed jobs, and the unions get a steady flow of members.

But for the most part, businesses are still steering clear of unions as they evaluate state workforces.

In addition, more than 70 percent of respondents listed "low union profile" as an important or very important factor, though that number is down from a year ago.