Stock markets in China extended their dramatic selloff on Friday, with the Shanghai Composite index losing as much as 7 percent intra-day, on the back of news that securities regulators are investigating suspected market manipulation.

Elsewhere in the region, downbeat sentiment prevailed ahead of a key referendum on Sunday that would determine Greece's future in the euro zone.

"In a nutshell, both the 'yes' and 'no' vote seem to bear significant risks for global markets. A 'yes' vote risks seeing Greece plunge into fresh political chaos... and means the country must go back to the negotiation table and try to knock something together again," IG's market strategist Stan Shamu wrote in a note.

"However, it's a lot worse on the other side as a 'no' vote will present a host of uncertainties that could really rattle markets. Either way, traders will need to buckle up for a tumultuous Monday," Shamu added.

For the month of June, the number of new jobs in the U.S. totaled 223,000, according to Labor Department numbers released Thursday, slightly missing Reuters' expectations for an addition of 230,000 jobs.

Stock markets in the world's second-biggest economy went on another rollercoaster ride on Friday, widening their three-week market rout to nearly 30 percent, a day after the benchmark Shanghai Composite crashed below the key psychological barrier of 4,000 points for the first time since April.

The Shanghai bourse kicked off the day with a sharp dive down as much as 7 percent, hitting an intra-day low of 3,629 points, before gradually clawing back losses to briefly trade in the black at the start of the afternoon session. It eventually ended down 5.8 percent, while the blue-chip CSI 300 index plunged 5.4 percent to its lowest close since March 27.

In Hong Kong, the index notched down 0.5 percent, as selling in the mainland curbed risk appetite.

The wave of selling linked to margin financing, fueled by the breaching of yet another key support level at 3,800 on Friday, is a key factor behind the bruising of mainland's stock market.

"As markets continue to slide, the risk of unwinding positions held by investors who borrowed money from the so-called "fund matching" companies become more imminent. When the Shanghai Composite reached the support level of 3,800, there [was] another round of selling from sub-prime borrowers," Louis Wong, head of research at Phillip Securities, told CNBC.

As the bloodbath in Chinese shares continued, authorities have stepped up efforts to shore up investor confidence, albeit with little effect. On Wednesday, China's securities regulator relaxed rules on using borrowed money to make stock purchases, while the People's Bank of China (PBOC) unveiled a big easing package over the weekend, which consisted of a 25-basis-point cut in the benchmark one-year lending and deposit rates, as well as a 50-basis-point reduction in the reserve requirement ratio (RRR).

Meanwhile, the China Securities Regulatory Commission (CSRC) said it had set up a team to look at "clues of illegal manipulation across markets" following weeks of tumultuous trading. 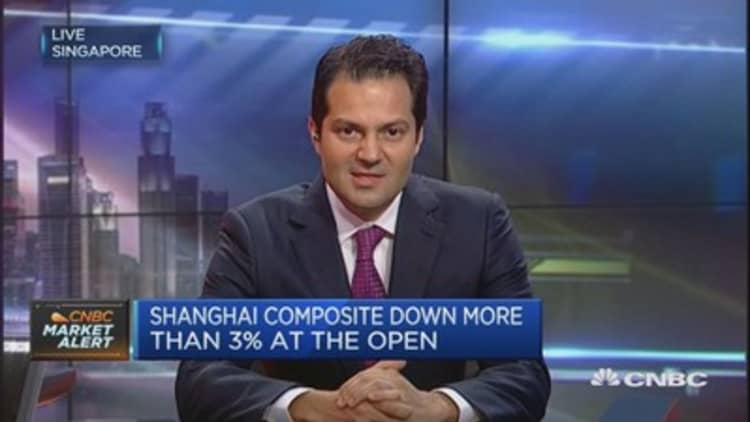 Shares of Fast Retailing - the owner of clothes brand Uniqlo - was hurt by a 11.7 percent fall in June same-store sales.

Sumitomo Mitsui Financial Group jumped 2.3 percent on the back of a report which said it will create targets by this fall to reduce cross-shareholdings. The news also delivered gains to other banking plays; Mizuho Financial and Mitsubishi UFJ Financial Group closed up 2.4 and 1.2 percent, respectively.

Australia's S&P ASX 200 index gave up most of Thursday's gains after its key resources sector took a hit from declining commodity prices.

After May retail sales missed expectations for the third straight month, retailers like Myer and Harvey Norman lost more than 1 percent each. But JB Hi-Fi reversed course late in the trading day to close up 0.15 percent.

Steep losses among blue chips underpinned the bourse's sluggishness on the final trading day of the week. The index's heaviest-weighted stock Samsung Electronics closed down 2.4 percent ahead of its earnings guidance next week, while Hyundai Motor and Posco eased 0.4 and 1.1 percent, respectively.

Outperforming the bourse, snack maker Orion Corp climbed 3 percent on the back of a Reuters report that it failed to be shortlisted for the sale of Tesco's South Korean unit, Homeplus. 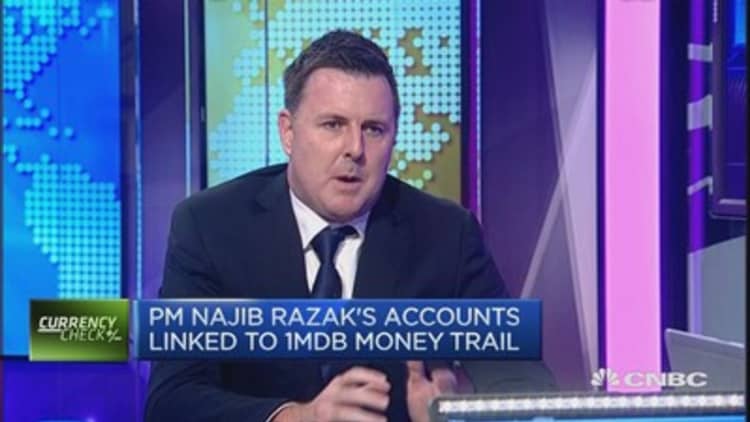 watch now
VIDEO4:2204:22
Will politics be a drag on the Malaysian ringgit?
Street Signs Asia

The FTSE Bursa Malaysia KLCI index dipped following a news report by Wall Street Journal that said nearly $700 million of deposits were flowed into what are believed to be the personal bank accounts of Malaysian Prime Minister Najib Razak.

Meanwhile, the shed 0.2 percent of its value against the U.S. dollar to hover near its weakest level since January 2006. At 1430 SIN/HK, the greenback fetched 3.7830 ringgit.