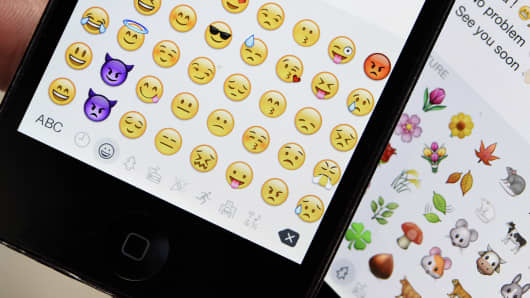 Times are changing, and emojis are everywhere. They're in Hollywood movies, bank passwords and even workplace emails.

It's easy to blame millennials, who grew up on smiley and winky faces and now make up the majority of the workforce. But there's one problem: Millennials aren't the only ones who support using emojis at work.

In fact, people over 65 years old are more likely than any other age group to say it is "always appropriate" to send emojis to a direct manager, peer or subordinate, according to data from a recent survey by Adobe about email habits among white-collar workers.

That being said, older people are less likely to approve of emoji use overall, but the difference between age groups was not as big as you would expect. (Notice in the chart below, the bars are almost identical across the four age groups). 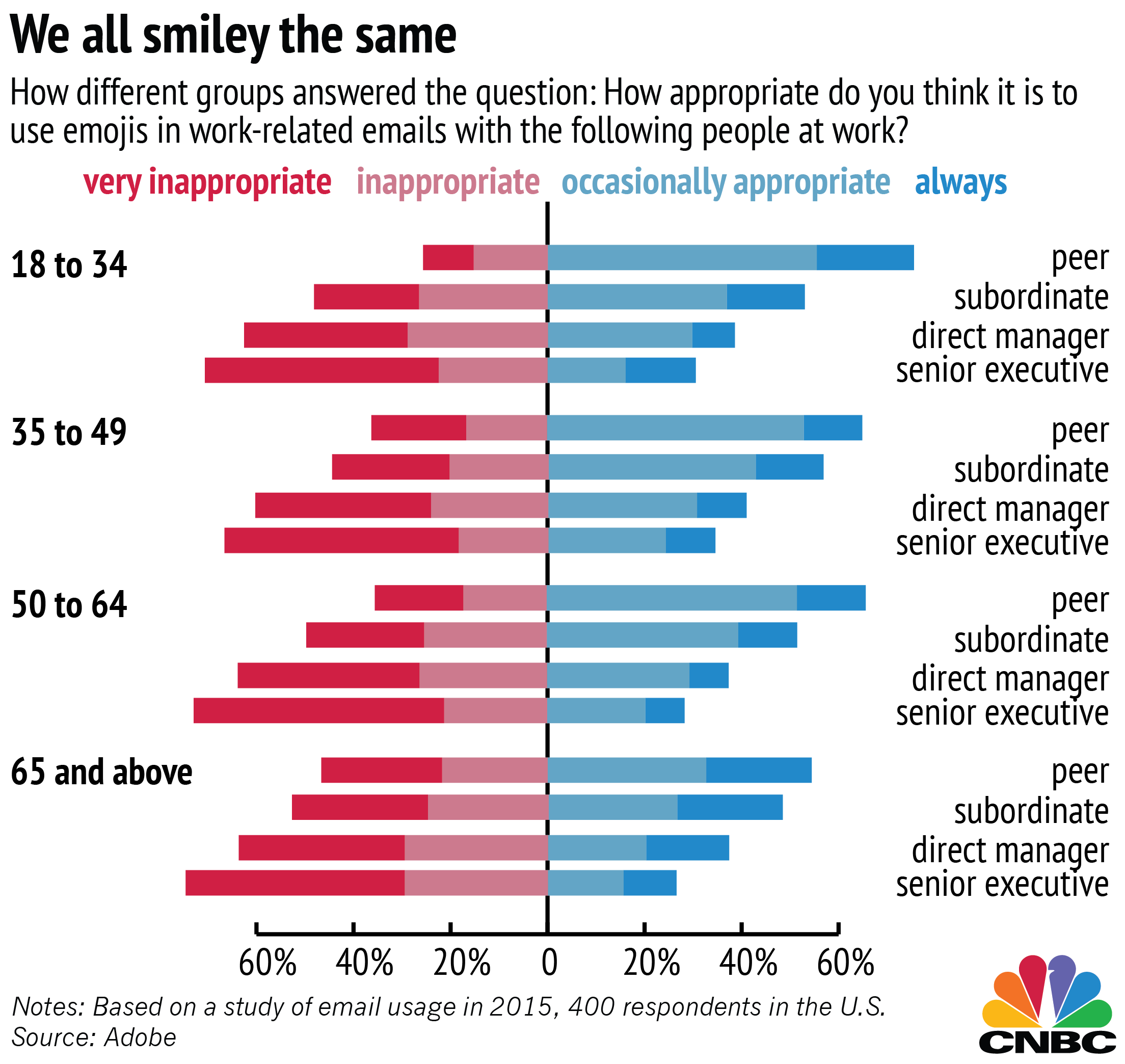 Of course, just because older employees say that they're fine with using emojis at work doesn't mean they usually do—they could just be willing to overlook that behavior in their younger co-workers.

But another survey of 1,000 American workers last year found that 76 percent of have used emojis in digital communication in their professional lives, and people age 18 to 34 only make up 54 percent of the workforce, so they're clearly not the only offenders.

In a third survey, conducted earlier this year on behalf of Fusion.net, 57 percent of millennials thought there were no instances when it is appropriate to use an emoji in work communication. They were more likely to approve of emoji usage if they were ideologically liberal or attended college.

The Adobe survey also dispelled other emoji stereotypes. While women are more likely to use emojis at work while communicating with peers, they're also more discerning than their male counterparts, 14 percent of whom said it was "always appropriate" to send emojis to senior executives, compared with 8 percent of women.

And while tech workers may drink beer at work and shun office wear, they're more likely than nontech workers to say that emojis are inappropriate while communicating with peers and subordinates and more likely to say they're OK for emails to managers and senior executives. 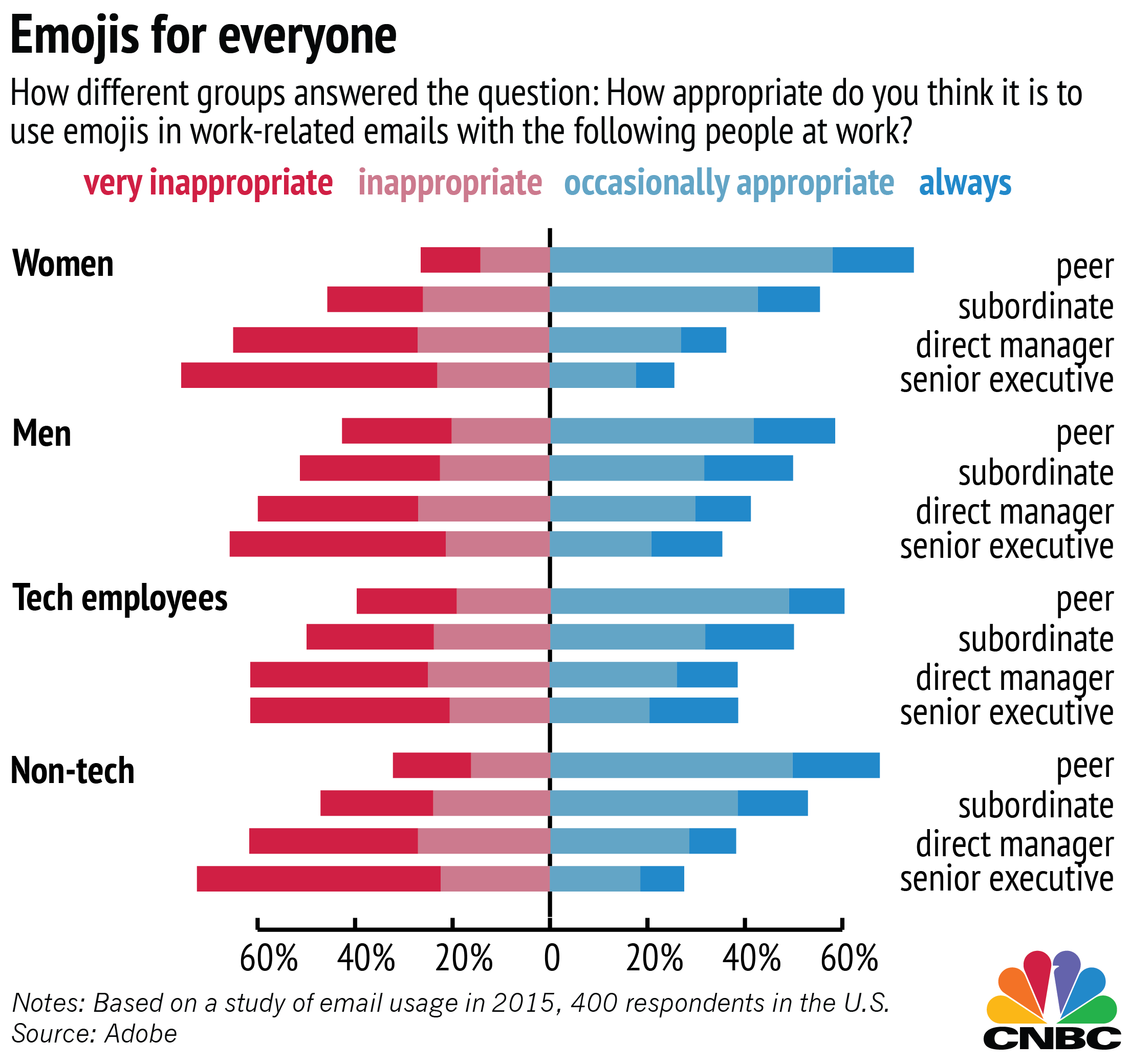 So while commentators at CNBC, The New York Times and The Guardian may disagree, it looks like our social conventions are changing, and it's not just the youngest workers who are willing to accept emoji-laden emails.

There's no good way to measure overall emoji usage overall, but anecdotal evidence and numbers from specific platforms like Instagram and Twitter point to explosive growth in recent years. Research suggests that while some employers may still find emojis unprofessional, most people think that emojis make emails seem friendlier. 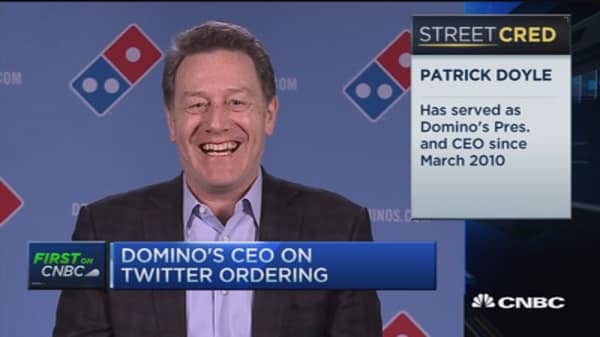 While emojis may seem childish to some, they seem to solve one of the most pervasive problems in emails—that innocent messages can easily be misinterpreted.

It's a brave new world of emojis at work, but it's probably best to stick with the most common choices, and definitely don't use the eggplant.