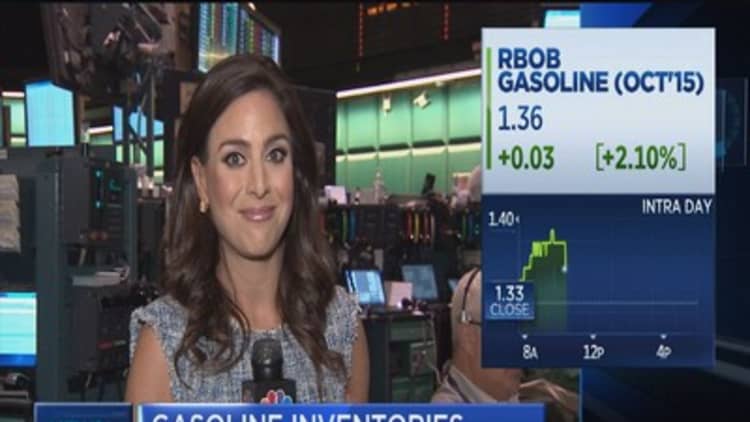 Global crude prices jumped nearly 6 percent on Wednesday, after the largest crude drawdown in 7 months at the key U.S. crude delivery point in Cushing, Oklahoma fed a new round of market volatility.

Oil bulls were also encouraged by doubts on whether the Federal Reserve will decide on a U.S. rate hike on Thursday after tame August inflation data.

Some speculators in oil had bet on a big U.S. draw since Monday, after market intelligence firm Genscape estimated a drawdown of 1.8 million barrels in Cushing.

Read MoreOil rises after Obama says no to crude exports

Official data from the U.S. Energy Information Administration showed a total U.S. inventory drop of 2.1 million barrels for the week ended Sept. 11. The Cushing draw itself was 1.9 million, the largest since the week ended Aug. 28.

The draw numbers were bullish beyond average analysts' forecasts. A Reuters poll called for a total stockpile growth of 1.2 million barrels last week. 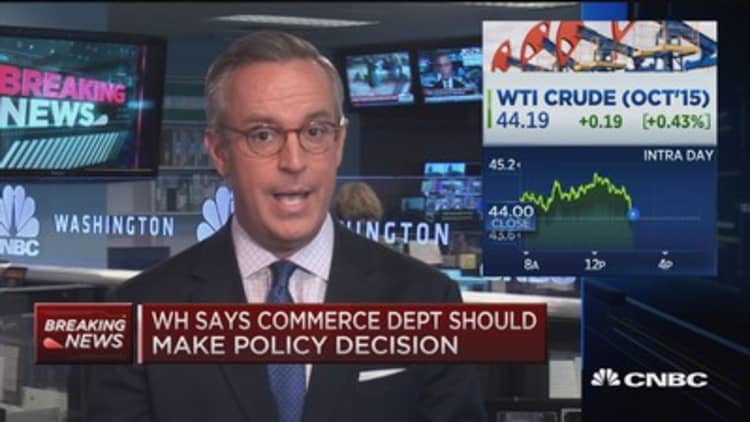 Even so, the EIA also cited an unexpected build of about 3 million barrels in gasoline and distillate stocks.

"A total stockpile of 153 million barrels for distillates is huge. It's the Fed's show from here on," Morton added, referring to the impending decision on the rate hike.

John Kilduff, founding partner at Again Capital, said the EIA report was modestly bullish, but did not justify such a large move.

Potentially boosting oil, said Kilduff, was testimony from U.S. CENTCOM Commander General Lloyd Austin confirming that U.S. Special Operations Forces troops are now on the ground in Syria assisting Kurdish forces in their fight against the Islamic State and other insurgents.

Reports of Russian troop activity in Syria have already added a few dollars to the price of oil, he said, noting that the country's civil war is attracting more attention in light of a worsening migrant crisis.

Traders told CNBC the market had been anticipating a technical move higher. US crude's gains accelerated after it broke through its 50-day moving average of $46.50.

A lower U.S. interest rate could restrain the dollar, making dollar-denominated crude cheaper for holders of other currencies. The dollar retreated from a one-week high after an unexpected 0.1 percent decline in U.S. consumer prices in August.

Read MoreOPEC looks to these countries for growth

"If the market continues to get data points similar to this week, which the markets have been anticipating for a while now, oil prices will continue to firm up and find support," said Chris Jarvis at Caprock Risk Management in Frederick, Maryland.