Um, what about the economy? 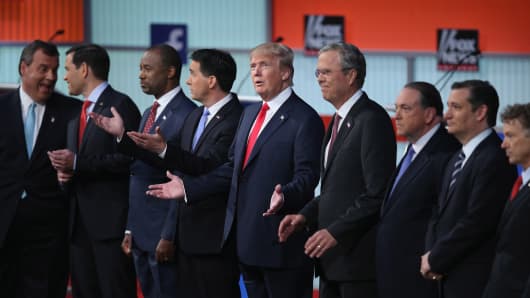 And yet, the first two GOP presidential debates have barely touched on the economy. That's just not acceptable for the many millions of Americans still looking for a job, or looking for a better job, or wondering how they'll ever afford a home, or pay for a college education, or cover their medical bills whether they have insurance or not. It's also bad politics, because time after time we've seen how presidential elections really turn on the economy and how the voters feel about their economic prospects.

Here's the good news: help is on the way. That's because the next GOP presidential debate will be broadcast and moderated by none other than my colleagues here at CNBC. That doesn't mean the candidates will give the best answers, but they'll have to expect the CNBC debate will force them to prepare to discuss tax policies, job creation, energy, health care costs, interest rates, inflation, retirement, college tuition, trade policy, etc. Candidates being candidates, some of them will still probably find ways to make a comment or two about personal looks, religion, and many of the other "issues" no one should really consider to elect a president. But it won't be very easy in a CNBC forum.

Okay, that's the easy part. You don't need to be a genius to predict with certainty that our CNBC debate will focus on the economy almost exclusively. But it's going to be a little harder for the candidates to stand out to the voters in a debate that will force them not only to talk a lot about the economy, but in some detail. It won't be easy to "win" a debate like that, but the way to do it is simple: get emotional. I don't mean the winner will be overly hysterical, loud, or rabidly excited. But I do mean that while economic and financial news is necessarily laden with emotionless numbers and data, people worry and obsess over their financial well being in a very heartfelt way. And the candidate who stands out in the CNBC economics-heavy debate will be the one who shows the most genuine personal emotion about economic issues and, more importantly, does the best job of tapping into the viewers' emotions about the economy.

Right now, Donald Trump and Bernie Sanders are doing so well in the polls because their campaigns and personal messages are chock full of emotion. President Obama may have insisted that the nation's economy is much improved when he spoke at the Business Roundtable yesterday, but the crowds flowing to the Sanders and Trump campaign events prove Americans just aren't buying it. A big section of the electorate is angry, worried, and just plain emotional about the economy right now. Sanders and Trump may soon see their poll numbers subside, but I doubt those feelings are going away for the voters any time soon.

What so many so-called political and news media experts don't understand is that the economy is almost always just as an emotional issue as abortion, war, or anything else in the hearts of the voters. What the most successful candidate will do is prove that he or she understands those emotions, feels the same way, but also has a calm, understandable and uplifting plan to ease the worst of the worries. And while I know it was last night's debate that took place at the Ronald Reagan Presidential Library, the candidates in the next debate would do well to follow Reagan's example when it comes to talking about the economy.

First a word of caution: Conservatives are never wrong to invoke President Reagan's name or his messages when we talk about politics. But we have to remember that the country's demographics and ethos have changed radically since the Gipper won his last election 31 years ago. It doesn't mean his policies wouldn't work today, but it does mean his messages do not resonate as much today as they did in 1980 and 1984. A candidate trying to emulate Reagan on every issue can't expect to win in today's electoral and media landscape without updating the message extensively. And many have already failed trying to do so. The Democrats fell into a similar trap when their presidential candidates tried to emulate President Franklin Roosevelt for about 40 long years. They lost seven of the eleven elections during that 1948-1988 period, six of them by a landslide. It wasn't until Bill Clinton appeared to shake off the New Deal/FDR messaging that the Democrats started to turn the tables on what had been a tough presidential election landscape for them.

But when it comes to the perils of trying to copy the Reagan mystique, the economy is the exception to the rule. Reagan had been Governor of California for eight years but when he ran for the White House he never listed all his accomplishments in Sacramento. Instead, he drew upon his many years of experience talking with voters all across the country as the internal and external spokesman for General Electric. It was during those years that he learned how to listen to working people, hear the concerns of all the employees from the executives down to the folks on the factory floor, and eventually find a way to touch their emotions. Reagan also spent the years leading up to his 1980 landslide victory broadcasting short national radio addresses that mostly focused on the woes of inflation and unemployment. As soon as he became a declared candidate he had to discontinue those broadcasts, but they were priceless training in the art of resonant economic messaging.

So here's my specific advice to the candidates, from either party, who want to succeed in the next debate and/or ultimately succeed at the polls: copy Reagan's economic message and messaging. Study those radio addresses where he talked about heating bills and gas prices. Take note of how he assured the voters the problem was with the government and not with them or their private industry employers. Try to emulate his years' long travels and discussions with actual blue and white collar workers while he was with GE. Give people hope and understanding, not bullet points from a resume and tough guy rhetoric.

And hurry up, the CNBC GOP Presidential debate is coming up on October 28th.