Gyrations in U.S. equity prices and the dollar from bets on the timing of the first U.S. rate hike in nearly a decade have fed volatility in oil prices, which have swung up to 8 percent a day over the past month.

New York Federal Reserve President William Dudley added to the expectations of an early rate increase, suggesting the central bank could pull the trigger as soon as in October.

Read MoreEnergy Transfer to join Williams Cos. in $37.7B deal

Wall Street's index was down 2.5 percent after hitting an Aug. 26 low on bullish U.S. consumer spending data in August and bets of a rate hike by October.

"There are more sellers than buyers in oil today and we could break the $44 support for WTI on the downside," said Tariq Zahir, who trades long-dated crude oil spreads at Tyche Capital Advisors in Laurel Hollow, New York. 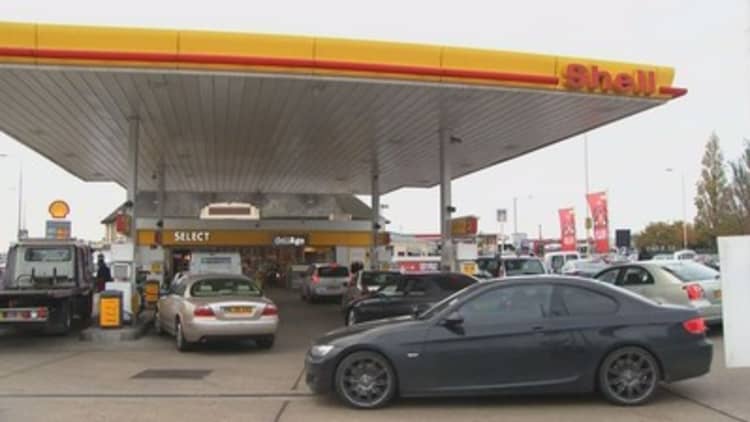 Heavy oil oversupply and eroding demand for energy in No. 2 economy China and other Asian and emerging markets have halved crude prices over the last year.

Read MoreWhy airplanes could soon be flying on seeds

Offsetting some of that bearish sentiment was data from market intelligence firm Genscape estimating a drawdown of over 1 million barrels last week from the Cushing, Oklahoma delivery hub for U.S. crude, traders who saw the figures said.

Genscape's Cushing stockpile estimates are a precursor to official inventory data on U.S. crude due each Wednesday from the U.S. Energy Information Administration. Genscape had estimated draws of around 2 million barrels in each of the past two weeks.

"We've been discussing the possibility that oil needs to move down to $30, but I think that is only if you run out of storage capacity and given that (there is) still quite substantial storage capacity, in my view you still have flexibility," said Bjarne Schieldrop, chief commodity analyst at SEB.