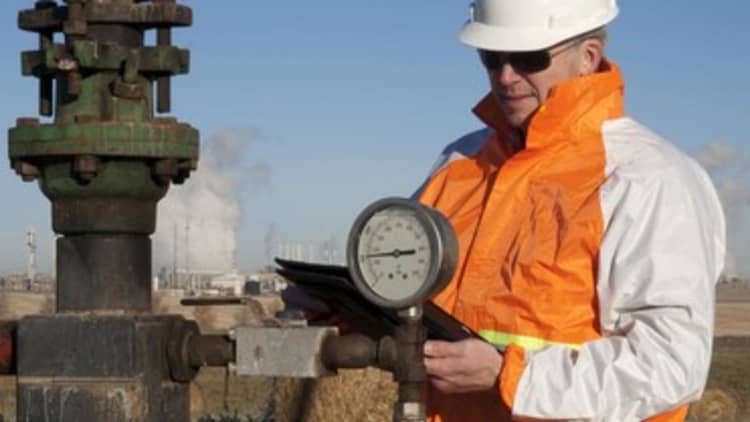 In February, Kloza had predicted the U.S. oil benchmark West Texas Intermediate crude, would drop to $30 a barrel.

On Tuesday, he pulled back on that prediction a bit: "I don't think we're going to get to $30."

"My hunch is WTI is pretty close to a bottom; somewhere between the [$32.40] … we saw in the Great Recession and where we are today," he told CNBC's "Squawk Box." He characterized the market as being in "the final innings" of decline.

Crude was under heavy pressure again in early trading Tuesday, a day after hitting its lowest levels in nearly seven years in New York. The sell-off sent energy stocks sharply lower Monday, resulting in the Dow Jones industrial average slipping into negative territory for the year.

"If we get a black swan event — a devaluation of the [Brazilian] real or some sort of other worldwide terrorism event that challenges travel — you could see prices briefly go into the $20s," Kloza said.

But generally, Kloza sees the floor nearing due to slowing production in the U.S. — about a half a million barrels a day in the next six months — and demand increasing. "I think demand is going to rise and the market is going to rebalance, probably in the second half of 2016 and 2017."

He added the oversupply of oil in the U.S. is not as bad as it seems. "This is a glut in terms of the most crude oil we've ever had in North America. But if you measure it versus the population, it's not altogether that much. We've had much more crude-per-population back in previous decades."

Crude prices have traded at or near fresh multiyear lows after OPEC decided not to cut production on Friday.

"It took away any hope that the oil market participants had that OPEC was going to step in anytime soon to support prices," Rob Haworth, U.S. Bank Wealth Management senior investment strategist, told CNBC's "Squawk on the Street."

"I think this market is in a 'prove it' mode. They want to see proof that production is going to decline somewhere in the world to resolve this excess of supply."

U.S. oil futures were up about 0.4 percent in early afternoon trading Tuesday after hitting a session low of $36.64 a barrel.

"It's just a remarkable story that is not at its end quite yet. What happened at the OPEC meeting was nothing short of remarkable. They have abandoned any kind of controls over production or working together as a group or as a cartel," John Kilduff, founding partner of Again Capital, told CNBC's "Fast Money: Halftime Report."

"The Saudis are going for the jugular here, in terms of trying to put out of business folks who produce oil at higher prices than they do. It's a throw-down for the ages, and it's not ending yet. I do think there might be something of a rebound into the very last weeks of December only because of strong driving demand, but energy stumbles out of the gate in the new year."