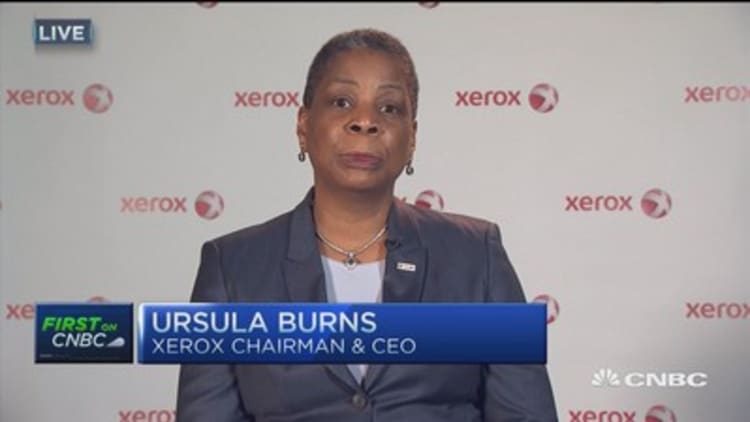 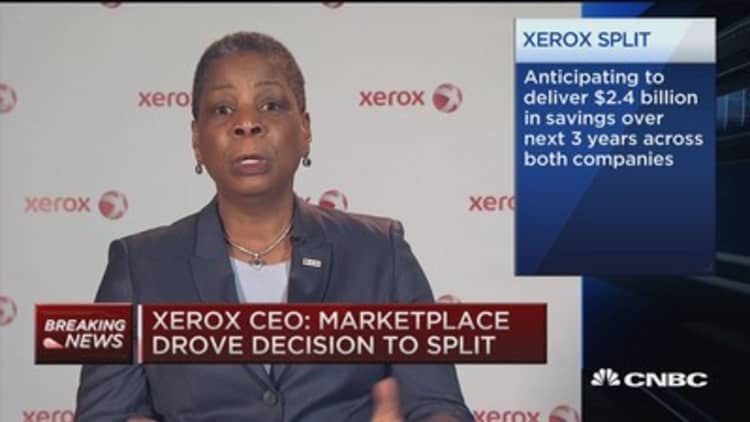 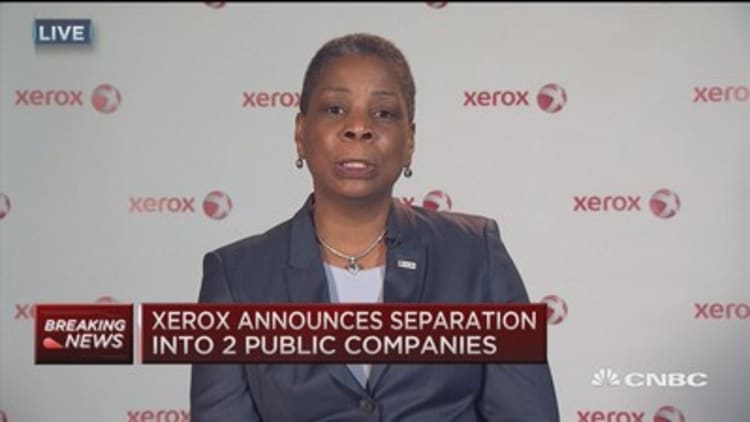 Xerox announced Friday it will split into two publicly traded companies and give Carl Icahn three board seats, but CEO Ursula Burns insisted that the billionaire investor was not the driving force in the decision.

Xerox shares were flat in premarket trading after surging 5 percent immediately following the announcement. (Get the latest quote here.)

Burns said Xerox initiated a review of its structure and portfolio in October to address changes it saw in the market. Xerox did not hold conversations with Icahn prior to the review or before it made a decision, she said.

Xerox will be divided into a business process outsourcing operation and a document technology company.

Burns said her role in either company has not yet been determined. That decision was intentionally put on hold, but now that Xerox is in the implementation phase, it will begin to hold discussions about the leadership of the two firms, she said.

"What I wanted our board, and management team, and me to do [was to determine] what the best path for the … company is going forward, not what the best role is for me," she said.

The printer and copier maker will give Icahn three seats on the board of the business process outsourcing company. He holds an 8.13 percent stake in Xerox.

"We think this is a major move and will greatly enhance shareholder value," Icahn told CNBC. "I have had several meetings with Ursula Burns and applaud and respect her for doing what she believes shareholders want — just as John Donahoe did with eBay and PayPal."

Xerox, whose shares had fallen more than 30 percent in the past 12 months, has been trying to turn itself around, shifting focus to software and services as corporations cut cost and customers switch to mobile technology.

The split will allow Xerox to be more flexible and responsive, Burns said, noting that the two new businesses will have very different growth rates and capital investment needs.

Among the market conditions that Xerox sought to respond to were changes in the health-care services industry, international developments in the services market and changes in how people use technology around the world.

The strength in the U.S. dollar also factored into Xerox's decision.

More than half of the company's 100,000 employees in its service business work outside the country, so the strong dollar is a benefit, Burns said.

But dollar strength makes some of Xerox's products more expensive in foreign markets, she said.

Asked how Xerox would respond to buyout offers for the two new smaller businesses, Burns said the company would field any reasonable offer but plans to lead the firms to success as separate entities.