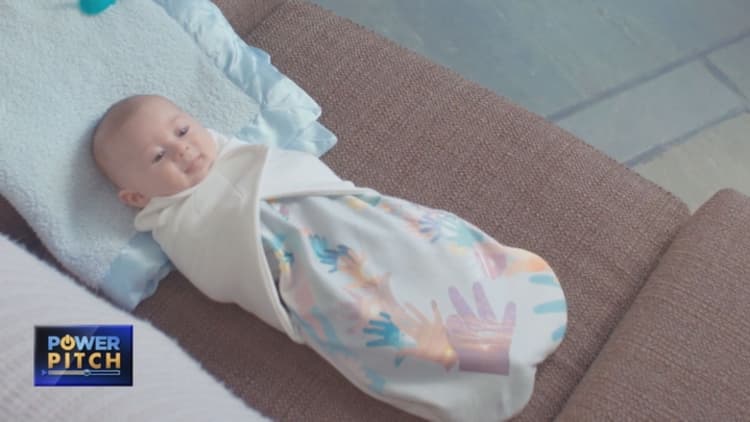 This start-up says it's engineered high-tech swaddles that keep babies at the perfect temperature.

"Our mission is to create a line of innovative products to improve infant health and well-being," said Jane Chen, co-founder of Embrace Innovations.

In January 2012, Chen and co-founders Rahul Panicker and Linus Liang launched Embrace Innovations. Their first product, the Embrace Infant Warmer, is a lower cost incubator for premature babies in developing countries. "Over the last few years, it has helped over 200,000 babies across 11 countries," said Chen.

The start-up then launched a new consumer product line, this time in the U.S., called Little Lotus.

Which is why the Little Lotus brand carries swaddles, sleeping bags and blankets designed to regulate a baby's body temperature, using a special material that retains heat to keep a baby warm, and releases heat to cool the baby down. The company's proprietary fabric was first developed for use in NASA spacesuits.

The swaddles are machine washable and include a bottom zipper feature for easy diaper changes.

Dr. Dyan Hes, medical director of Gramercy Pediatrics, questioned the safety of the Little Lotus products. She said swaddling can pin a baby's arms and inhibit their movement, which can increase the risk of SIDS

But Chen said Little Lotus follows industry standards, adding that "we have the ability to swaddle but you can actually take those wings off and fold them behind so it turns into a regular sleeping bag for babies where the arms are still out."

When compared to other swaddles and sleeping bags in the space like the Halo SleepSack and Miracle Blanket, Chen said, "Little Lotus is the only product on the market with unique technology that helps keep babies at the perfect temperature."

"We have already started prototyping products that have temperature sensors and an accelerometer," said Chen. In the future, parents would be able to monitor their baby via a smartphone, she added.

Chen said that on a larger scale, her start-up also intends to leverage this technology and its warmer to create predictive diagnostics for infants with major diseases.

Chen told CNBC Little Lotus plans to introduce a new line of prints this summer, and the start-up is collaborating with Clinique to sell its products on the Clinique e-commerce platform next month.--Comments, questions, suggestions? We'd love to hear from you. Follow us @CNBCPowerPitch and join the #PowerPitch conversation