Why Kashkari's crackdown on big banks is dangerous

Neel Kashkari, the new president of the Federal Reserve Bank of Minneapolis, unveiled a major program to explain to the nation, Congress, and the media why large banks needed to be broken up. 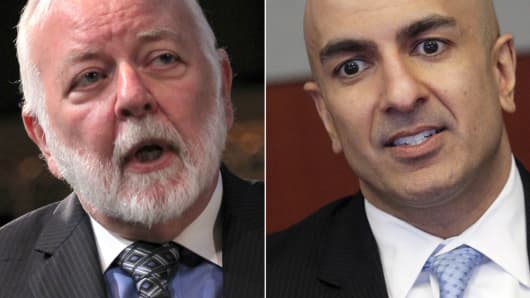 The Minnesota Fed serves a population of less than 9 million people in the states of Minnesota, Montana, North and South Dakota and small portions of Wisconsin and Michigan. In fact, in some of the areas served by the Ninth District bank, there are more buffalo than people. Approximately half the banks in the district are deemed to be agricultural banks and most have less than $200 million in assets.

Kashkari, who had just run for governor of California on the Republican ticket, and who had for a very brief period administered the Troubled Asset Relief Program (TARP) at the United States Treasury, was elected president of the Minneapolis Fed on January 1, and announced his plan in February.

The consequences of negative interest rates

His base case is that big banks, by their very existence, threaten the stability of the financial system of the United States. He believes that the risk they represent cannot be determined by the Federal Reserve, itself, and, therefore, these banks need to be broken up. He argues that the rules and regulations put in place over the past 7 years may be nice but they are not likely to avoid another financial crisis and that the Fed is incapable of managing the situation.

His solution is to:

There are some shocks here. A Republican is advocating much more intrusion of government into the financial system and the imposition of a value added tax. More surprising, the president of a Federal Reserve District Bank — who will be a voting member of the Federal Open Market Committee in 2017 — is arguing that the Federal Reserve is incapable of regulating the banking system. However, it is clear that the program being suggested would benefit the small banks that dominate the Ninth District Federal Reserve Bank.

Oil credit crunch may be worse than housing crisis

The first problem with Kashkari's plan is that a value-add tax on financial activity would be paid for by consumers. This increases the cost of banking to American households. A more important issue is that, if the capital requirements in the banking system are raised to 25 percent of assets, it will cause banks to either stop growing or more likely shrink. As they shrink, they reduce lending. This has two additional effects: It slows money supply growth and weakens economic activity. In sum, it is very likely to cause a recession.

There is a third issue here. If the biggest banks are turned into public utilities, their ability to take risk and fund large projects will be eliminated. This is also a threat to the economy. Further, if the United States is to force its biggest banks out of existence, its leadership of the global financial system will be eliminated in the process. This will threaten the status of the dollar as the only global reserve currency.

Many who have looked at Mr. Kashkari's proposals have argued that government should not break up the big banks, but investors should seek to unleash value. The observers making these proposals are clearly unaware that we have "laboratory" cases which show what happens when big banks are broken up. Bank investors have not benefited.

'Bad Goldilocks' could be the market's worst enemy

Citigroup was the largest bank in the United States by global assets and now it is fourth largest, according to the Federal Reserve. It has divested close to a trillion dollars in assets, including its life- and casualty-insurance businesses, an investment bank, a huge asset-management company, bank branches across the United States, the largest consumer finance company in both this country and Japan, retail banks in over 30 countries, plus much, much more. The stock is selling at a 40-percent discount to book value and no investor has benefitted to date from breaking up this bank.

Bank of America claims to have sold over 70 individual businesses and loan portfolios. It was also the largest bank in the United States at one time. It is now second largest, according to the Fed, and also sells at a 40-percent discount to book value. No winners here from breaking up this bank. JPMorgan Chase is the largest bank by assets but it, too, is now actively closing down accounts everywhere in the world. No benefit to investors here either.

All of this has made America far less powerful in the global financial system than it once was.

Commentary by Richard X. Bove, an equity research analyst at Rafferty Capital Markets and the author of "Guardians of Prosperity: Why America Needs Big Banks" (2013).