Want to know the secret to beating the Ivy League endowment-fund billions in the market? Simple. There's no secret at all. Just avoid the allure of high-cost, complicated alternative investments these endowments favor, and for the most part, use exchange-traded funds to diversify your portfolio overseas and in the bond market.

That's the lesson of Southern Virginia University, a small school based in Buena Vista, Virginia, that is devoted to The Church of Jesus Christ of Latter-day Saints. Over the past decade, it has had more than religious conviction on its side: Its tiny endowment fund has been among the best-performing in the nation. That's according to details recently revealed in a New York Times review of the annual NACUBO-Commonfund study of university endowment performance.

What the Times article did not reveal, however, is exactly how the school creates a diversified asset-allocation plan using ETFs.

So we asked. And Southern Virginia University's controller, Jesse Seegmiller, laid it out for us.

Southern Virginia University has an endowment of just $1.1 million, placing its net worth much closer to an individual investor than an Ivy League giant. That's why the school's approach to the market is a valuable lesson for all investors seeking to minimize cost while generating reasonable long-term returns, and without stretching limited research skills and time or taking on too much risk.

Is your dividend plan on track? Answer these 4 questions

"Since the portfolio is so small, it would be difficult to get adequate diversification with individual bonds and international equities. ETFs provide diversification at a reasonable cost, with returns that should be similar to the indexes," the Southern Virginia University controller said. He added, "I do not have any particular bond analysis skill or experience that I feel would give me any kind of edge in the market, hence ETFs provide skilled management at a reasonable cost."

The biggest piece of that investing plan is not ETF-based: 60 percent of the endowment is a focus list of 15 to 20 U.S. stocks that Seegmiller selects. But the 20 percent of stock exposure that is in international equities is spread across three ETFs.

Todd Rosenbluth, director of mutual fund and ETF research at S&P Global Intelligence, said, "Rather than incur the costs to sort through the individual security universe, [ETFs] allow firms to focus more on getting the asset allocation correct." 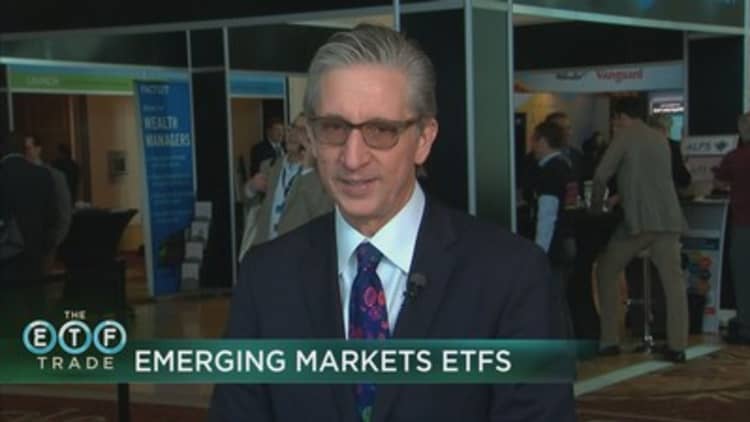 Seegmiller said the allocation to frontier markets is a recent decision. "We are long-term investors, so I wanted to have some exposure to the future growth sources in the world economy."

"I am not a user of alternatives either, as I feel that these are mostly on the spectrum of financial toxic waste, the place where stocks go to die," Goldberg said. Goldberg, similar to Southern Virginia's fund, picks individual stocks from different sectors to create diversified U.S. stock portfolios for clients and uses ETFs in areas where he feels that he is not an expert: emerging markets, areas of fixed income, international dividend investing among them.

The institutional investor migration to ETFs has been identified previously in a study conducted by investment consulting firm Greenwich Associates, in conjunction with BlackRock's ETF company iShares.

"Since ETF expense ratios have come down substantially and liquidity has improved, many institutional investors are now using ETFs for longer-term strategic investment exposures, in addition to tactical applications," Mishra said. "Additionally, now there are ETFs available for virtually any investment strategy, providing low-cost, diversified exposure to almost any corner of the market."

In the NACUBO-Commonfund study, the smallest endowments — those under $25 million — edged out the biggest endowments, averaging a five-year annualized return of 10.6 percent to the $1 billion-plus category's 10.4 percent.

The Southern Virginia endowment has 20 percent in fixed-income ETFs, divided between 15 percent in U.S. fixed income and 5 percent in international fixed income. Exposure to bonds ranges from U.S. government bonds to investment-grade corporate bonds, U.S. agency debt and international Treasury bonds. The endowment has stayed out of high-yield and long-dated bonds, preferring the short- to intermediate-bond durations, Seegmiller said. As of the end of 2015, the university's average duration was seven years.

Our goal with regard to both of these categories has been to provide index-like returns with adequate diversification and hope that the U.S. stock portion of the portfolio outperforms the U.S. indexes. So far, so good.
Jesse Seegmiller
Southern Virgina University controller

Seegmiller does include two actively managed U.S. bond funds with higher expense ratios than ETFs: a 1 percent allocation to the Franklin U.S. Government Securities Fund (FKUSX), which has an expense ratio of 0.76 percent, and a 2 percent bet on the T. Rowe Price New Income Fund (PRCIX), which has an annual fee of 0.60 percent.

"I don't have a bias against active management when it seems the fee is worth the results," Seegmiller said. In the case of the Franklin U.S. Government Securities Fund, he said that at the time it was selected, he wanted exposure to U.S. agencies, and "this seemed the best choice available." But he added, "That was some years ago. ... I should probably look at some current alternatives."

The T. Rowe Price New Income Fund is a legacy holding, and the one noncash equivalent investment the fund was holding at the time he took it over. "In its case, I felt and continue to feel that the results justify its continued inclusion in the portfolio."

The bond ETF group has slightly outperformed the BarCap Global Aggregate bond index since Seegmiller began managing the fund in 2008.

Millennial investors: Maybe time isn't on your side

"Our goal with regard to both of these categories has been to provide index-like returns with adequate diversification and hope that the U.S. stock portion of the portfolio outperforms the U.S. indexes. So far, so good," Seegmiller said.

He said it is important to note that the endowment rebalances once per year, and since 2008, rebalancing has resulted in purchasing additional fixed income almost every year.

Mishra said bond ETFs are becoming more popular due to diminishing liquidity for individual fixed-income securities. Due to enhanced regulatory requirements after the financial crisis, banks have curtailed their market-making activities in bonds. Banks' inventories of bonds have come down substantially and with reduced liquidity, executing individual bond trades is not only more expensive (due to higher trading costs) but also more time consuming now. As such, many investors prefer to buy low-cost, diversified bond ETFs instead of individual bonds."

For the past 10-year period, Southern Virginia's annualized return was 11.2 percent. For the most recent fiscal year, 2015, its return was 10.5 percent. The average return last year for all endowments was just 2.4 percent.

There is one important caveat to the David versus Goliath endowment success story, which Seegmiller explained to the Times. When he took over the fund in 2008, it was almost entirely in certificates of deposit, and that made a move into stocks, at the depths of the financial crisis, "a no-brainer." It's a timing advantage that can't be recreated, and no doubt contributed to the endowment's performance relative to peers.

To read the full New York Times report on the David vs. Goliath battle among the endowment funds, click here.

Classic dividend stocks like P&G and Pepsi are tanking, but think before you sell them
Mitch Goldberg
The North Korea factor: Jittery ETF investors look for ways to safeguard their portfolios
Bryan Borzykowski
Dow at 22,000: All eyes on an index few investors actually put money in
Eric Rosenbaum
Read More