North Dakota wakes up to hangover as oil swoons 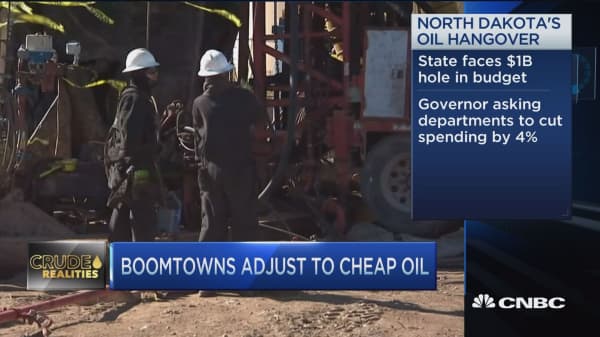 The U.S. shale revolution restored America's outsize role in global crude production, but the story of the oil upheaval is playing out differently from state to state.

There is perhaps no place where the transformation is so stark as North Dakota. The state's oil production grew tenfold over the past decade as it built a thriving industry virtually from scratch, driving unemployment to a national low and filling government coffers with surging tax revenue.

But the collapse in crude prices has turned the tide. Oil and gas exploration activity has plummeted, out-of-state workers have decamped, and the budget has swung from surplus to deficit. North Dakota is faced with adversity from a position of strength after years of boom times, but the state's return to growth will depend in large part on when and to what degree oil production returns.

"The impact on sales tax from oil prices being down is really what's putting the pressure on the budget situation. Oil would make the biggest impact," he added, "WTI oil prices probably need to be from $50 to $60 a barrel before things would turn around."

The boom had its roots in the conviction of wildcatters like Continental Resources founder and CEO Harold Hamm that shale rock buried deep beneath the Earth's surface could be extracted profitably through horizontal drilling and hydraulic fracturing. Fracking allows drillers to free oil and gas from shale by pounding underground formations with a mixture of water, minerals and chemicals at high pressure.

Hamm and other true believers in the Bakken were proved right. But the production explosion they helped fuel led to one of the biggest crude market oversupplies in history, resulting in a downturn in the second half of 2014 that has sent prices spiraling more than 70 percent from over $100 a barrel to a low of $26.

The rout only accelerated after the Organization of the Petroleum Exporting Countries declined to cut production, which would normally prop up prices. Many saw the move as an effort by Saudi Arabia to paint a bull's-eye on the backs of U.S. frackers and other high-cost producers, a claim Riyadh denies.

Regardless, the impact on U.S. oil and gas exploration has been unambiguous.

The number of rigs operating in North Dakota fell from just under 200 at the peak of exploration in 2014 to just more than 30 today. Yet production has just barely slipped as drillers relocate rigs to their best acreage and complete wells more efficiently.

Those efficiencies are good for drillers' balance sheets, but they do not bode well for sidelined oilfield crews.

While drillers have certainly improved the fracking process, as much as two-thirds of productivity gains are the result of simply relocating rigs, said Raoul LeBlanc, an American onshore energy analyst at IHS. Much of the drilling in North Dakota is located in two areas in the state's northwestern counties where break-even costs are as low as $35 a barrel, according to data mapping IHS showed CNBC.

That has created a vicious circle in which producers drill fewer wells because they are drilling their best rocks.

"What needs to happen here to reinvigorate this play and generate a bunch of employment is for prices to go up enough to drill bad wells," LeBlanc said. "In the end, you need volume to drive this."

Jeff Bush, president of energy personnel firm CSI Recruiting, said unlike other parts of the country, the Bakken lacked not only oilfield talent, but a population.

With much of the early development work done, he said he was hard pressed to say economic activity would ever return to the "full throttle" levels of the boom years.

"That's what makes for boom and bust towns — when there's nothing, when there's no infrastructure, no service industry, no hotels, no residential, no restaurants — and then all of a sudden, all that pumps in. It's all artificial. None of it is native," he said.

Indeed, the Bakken stands out for its wage and job growth, largely because it's among the newest fields and because the region had the smallest workforce when production started ramping up a decade ago.

Between 2007 and March of 2015, oilfield workers in seven fields that CNBC analyzed saw their average weekly wage rise by 48 percent to $1,120. The average national paycheck is $857 a week.

Total employment more than doubled to 131,000 in the Bakken counties, CNBC estimates. To be sure, that was still far below employment in larger, more established fields such as the Permian Basin in Texas or the sprawling Marcellus in Pennsylvania.

Wages also posted the biggest gains in the Bakken; for all private sector workers, wages jumped 81 percent, to $1,055. For those working in the natural resources sector, wages more than doubled to $1,467 a week.

Texas collected nearly twice as much severance tax as North Dakota did in absolute dollar terms in 2014, but the revenue accounted for just 10 percent of the Lone Star State's overall tax income. North Dakota got more than half of its taxes from oil and gas.

In North Dakota, a portion of severance taxes goes back to counties and cities that generate oil and gas, and 30 percent per year is funneled into a legacy fund. The rest is spent on funds for schools, water projects, infrastructure and various other projects.

With severance, sales and income tax falling, the state now faces a $1 billion budget shortfall, but has levers to pull. Standard & Poor's said North Dakota can cover the gap by electing not to spend the $1.2 billion in one-time expenses it funded in the previous biennium.

How cheap oil has hit one shale boomtown

North Dakota has also drawn down its entire $331.7 million surplus, and plans to tap nearly $500 million from its budget stabilization fund. Further, Gov. Jack Dalrymple ordered state agencies to slash their budgets by 4 percent, totaling cuts of about $245 million.

While the state is by no means bust, analysis suggests the good times have at least plateaued.

North Dakota's compound annual growth exceeded 9 percent between 2009 and 2014, according to Standard & Poor's, but IHS Global projected a 0.7 percent fall in real gross product in 2015, and another 1.6 percent decline this year.

IHS sees the state's employment declining 2.1 percent in 2016, though it's important to note that North Dakota ended 2015 with the lowest unemployment rate in the nation at 2.7 percent. And many wonder whether the state will refocus on farming, which, until the oil boom came along, was the state's biggest economic driver with one in four residents working in agriculture.