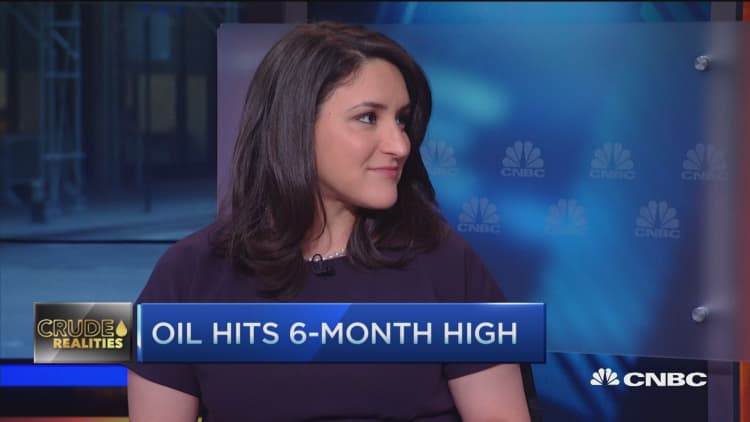 The oil market is likely to remain choppy this year, but crude prices will probably end the year just $5 or so higher, Tamar Essner, director at Nasdaq Advisory Services, said Tuesday.

U.S crude prices have risen more than 80 percent from a January low of $26.05 a barrel. But Essner said that momentum may not be sustainable.

"Too much of what's driven oil prices higher have been these supply outages, and too many of them are temporary, so that supply will come back to market," she told CNBC's "Squawk Box."

The market has already worked through a number of supply interruptions this year, including a workers strike in Kuwait last month and outages that resulted from wildfires in Canada's oil sands region.

Nigerian production has fallen in the face of renewed militant strikes on the country's oil infrastructure. Meanwhile, Venezuelan output is down as the country deals with a severe cash crunch.

At the same time, she said, Saudi Arabia is unlikely to alter its policy of maintaining high production to protect its market share and pressure high-cost oil producers to turn off the tap and balance oversupply.

Saudi Arabia is pumping about 10.1 million barrels per day of oil this year, accounting for nearly a third of OPEC's 32.4 million bpd output, according to data gathered by the producer group.

The policy makes sense because the Saudis have the largest oil reserves in the world and low break-even costs of producing crude, Essner said. As such, they are monetizing those assets as much as they can as they seek to diversify their economy away from energy, she added.

This strategy not only helps Saudi Arabia squeeze U.S. shale producers, but supports its "cold war" with regional rival Iran, which is rebuilding market share following the lifting of sanctions earlier this year, she said.

"It's about Saudi Arabia saying, we don't want to carry the onus of cutting back production and allow other people to take market share," Essner said.

Is Saudi Arabia calling the market's bluff over oil?