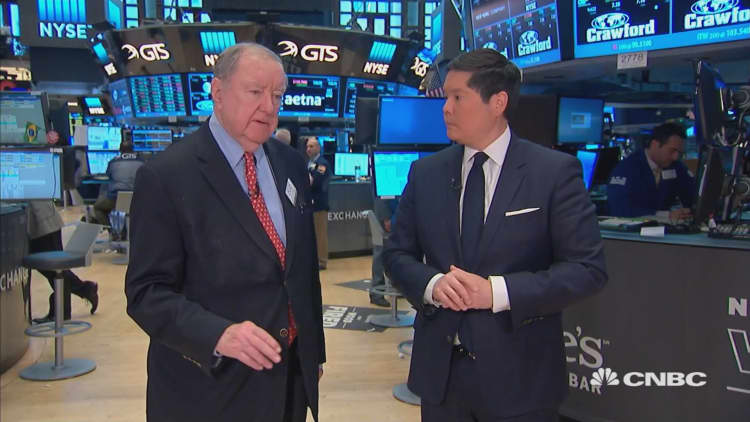 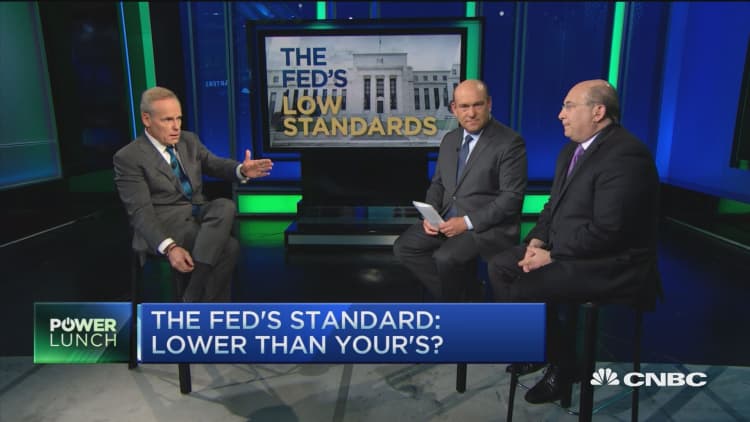 U.S. stocks closed higher Friday, with tech stocks leading. The Dow Jones industrial average failed to recover gains for the week after stocks fell amid renewed concerns of a rate hike sooner rather than later.

The Dow closed about 65 points higher, with IBM and Travelers contributing the most to gains. Information technology rose nearly 1.2 percent to lead nearly all S&P 500 sectors higher. The Nasdaq composite outperformed with gains of 1.2 percent, helped by gains in shares of Apple, Comcast and Applied Materials.

"It looks like the market is just kind of doing the rebound from all the Fed talk this week," said Chuck Self, CIO of iSectors. He noted some support for stocks from stabilization in oil prices.

US Treasurys lower after home sales, amid stock climb

U.S. crude oil futures for June delivery settled down 41 cents, or 0.85 percent, at $47.75 a barrel, up more than 3 percent for the week. The contract rolled to July after the settle. Meanwhile, Baker Hughes' weekly rig count remained unchanged.

"It is (options) expiration today. I can't tell you what's noise related to flows around expiration," said Peter Boockvar, chief market analyst at The Lindsey Group. He noted that weakness in the euro and the yen supported a rise in those regional indexes overnight, helping U.S. stocks rise amid "a dearth of news here."

Read More Signs of fear are running rampant through the market

In the only major economic release of the day, existing home sales increased 1.7 percent in April to an annual rate of 5.45 million units, according to the National Association of Realtors. March's sales pace was revised slightly higher to 5.36 million units from the previously reported 5.33 million units, Reuters said.

"That was another positive," said Thomas Wilson, senior investment manager and managing director of wealth advisory at Brinker Capital.

Treasury yields turned lower, with the around 0.86 percent and the 10-year yield near 1.85 percent.

The U.S. dollar index was a touch higher for its fourth-straight day of gains and its first three-week win streak since March 2015. The euro was near $1.122 and the yen near 110.1 yen against the greenback.

The Nikkei 225 gained nearly 2 percent for the week, its second-straight week of gains, as the G-7 finance leaders' meeting kicked off in Japan Friday.

Read MoreThe Fed brought this fear back to markets this week

In earnings news, Campbell Soup reported quarterly earnings a share above estimates on revenue that was a touch lower. The soup and food maker noted continuation of a "very challenging consumer environment," but it did raise its full-year earnings forecast. Shares fell nearly 6.4 percent.

Deere posted earnings that beat on both the top and bottom line. The heavy equipment maker noted the continuing downturn in the global farm economy, as well as weakness in the construction equipment sector, but said it was helped by its flexible cost structure, among other factors. The stock closed nearly 5.5 percent lower.

Foot Locker matched estimates with first-quarter profit of $1.39 per share. Revenue was slightly below analysts' expectations, and the comparable-store sales increase of 2.9 percent was below consensus estimates of a 4.5 percent jump. The company notes that profits were at a record level, and that the company did well in dealing with rapidly shifting customer tastes. Shares closed almost 6.5 percent lower.

The Dow Jones industrial average closed up 65.54 points, or 0.38 percent, at 17,500.94, with DuPont leading advancers and McDonald's the greatest decliner.

The closed up 12.28 points, or 0.60 percent, at 2,052.32, with information technology leading nine sectors higher and consumer staples the only decliner.

The CBOE Volatility Index (VIX), widely considered the best gauge of fear in the market, fell to trade near 15.2.

About four stocks advanced for every decliner on the New York Stock Exchange, with an exchange volume of 962 million and a composite volume of nearly 3.5 billion in the close.

Gold futures for June delivery settled down $1.90 at $1,252.90 an ounce, its lowest since April 27 and posting a second-straight week of decline.