Google Maps vs Waze vs Apple Maps - Who wins?

It's the summer. It's Fourth of July weekend. And that means Americans are hitting the road to vacations and family gatherings. We wanted to find out: What's the fastest way to get there?

We now rely so much on phone-based navigation apps to get us where we're going that long gone is the world of paper maps.

So which navigation app is the best at getting us where we wanted to go? People certainly have their opinion of which app they think is best. But when have people really been able to test this out by sending multiple cars at the same time to the same destination? This is what we did.

I used Google Maps. Nick Wells used Waze – which is owned by Google parent Alphabet but operates independently and competitively. And our producer Betsy Spring used Apple Maps. We all started at the same place, at the same time. We didn't race in traffic. We picked a set of destinations and followed the maps exactly. We wanted to see which map would give the fastest route. In addition, we also wanted to see which map would give the most accurate time estimate before we started driving.

In the end, we found that Google Maps was the most accurate predictor based on our driving, closely followed by Waze. Far behind was Apple Maps.

Most fun was Jim, our cameraman, in the car with Betsy. Apple Maps would suggest certain turns, and he would just shake his head, saying "no, that's a bad idea." Betsy had to follow the instructions as part of our rules, and it seems she might have been better off listening to her passenger. At first we thought maybe she was driving too slowly the entire time, but Jim confirmed that no, she had been driving with the flow of traffic.

On all our trips, each map gave us different directions for the fastest route. We purposely picked destinations that would have several options with the same time. There would be no point testing them if they all said the same thing. The algorithms clearly are designed differently enough that they suggest different routes. What we didn't understand was why.

We started at our CNBC headquarters in Englewood Cliffs, New Jersey. Our first destination in the Garden State was the Funplex in East Hanover.

Using Google Maps, I took a wrong turn at the very end, getting confused by the various parking lot entrances. That cost me five minutes in trying to turn around, causing me to barely lose to Waze in that first segment.

Our next destination was a McDonald's in downtown Elizabeth. Google Maps quickest there. From there we went back to our headquarters. Google again won that segment. 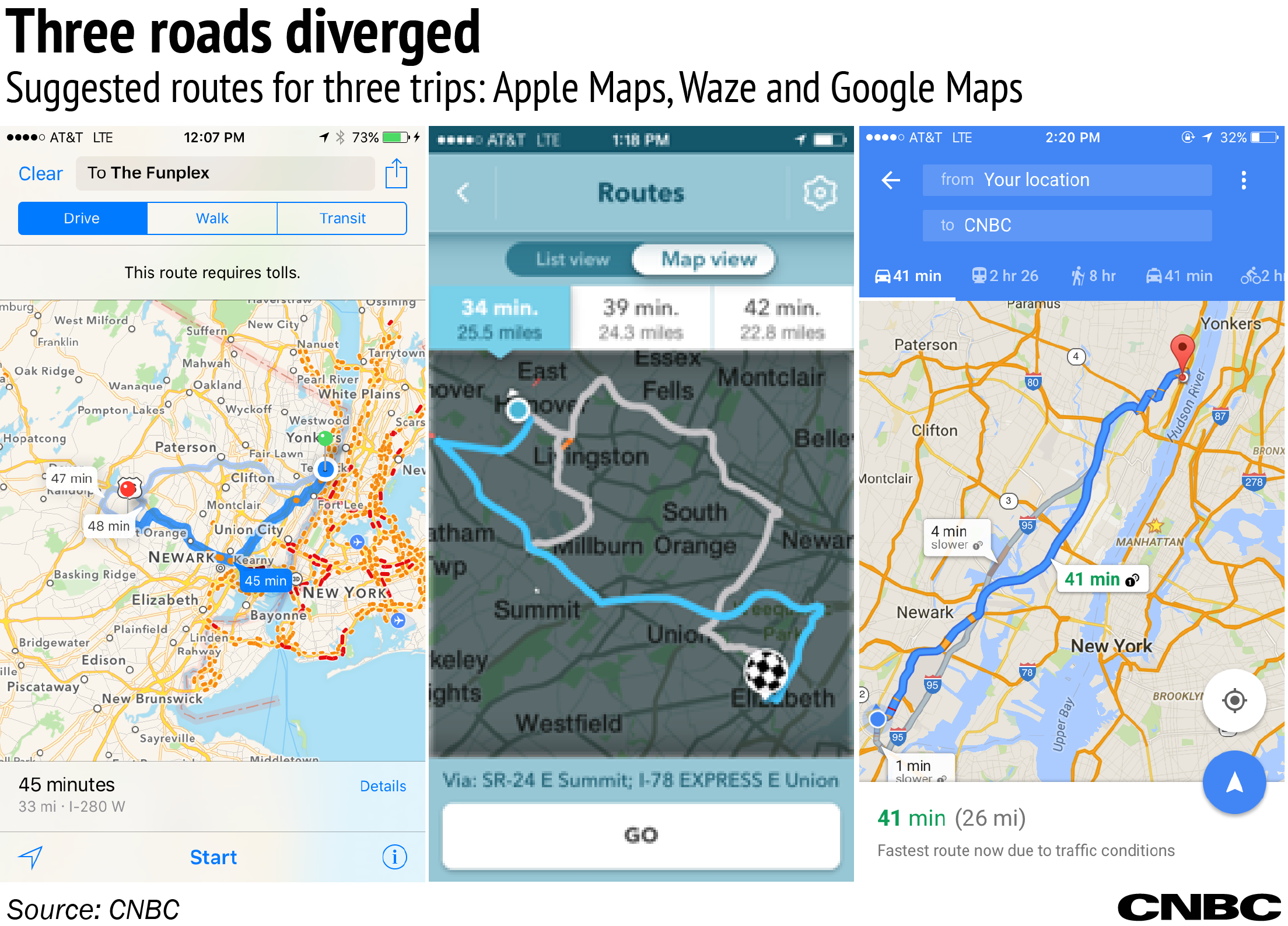 We reached out to all three companies to ask why there would be these differences. Apple didn't give any specific information about how its algorithm works.

One interesting point is the relationship between Waze and Google Maps. Yes, Google did buy Waze a few years ago. And that has caused many people to think that both maps are the same thing. But that is not at all what we found in the results. The routes given were different between the two apps.

A Waze spokesman explained that Waze and Google Maps operate independently, and that they are two competing apps in the navigation space. Waze's data comes from three main places: [1] a community of volunteers updating the information manually, [2] passive data from your phone along those roads, and [3) working with municipal partners across the globe to get information about things like construction and road closures.

Google said the data is anonymously crowdsourced from "oodles of Android phones moving through the world." The company also used machine-learning models to predict more accurately what the speed will be by the time you get to points at faraway places on the route. Google said it tracks speeds in traffic based on what the real traffic flow is, not just whatever the posted speed limit is.

For Fourth of July, Waze gave us some fun facts based on data from last year's holiday, when July 4th fell on a Saturday. The best day to get on the road nationwide was Saturday, either before 11 am or after 3 pm. The worst time to go was Friday afternoon, specifically between 3 and 5 pm. On July 4 itself, traffic peaked that day at 10 pm — right after fireworks!