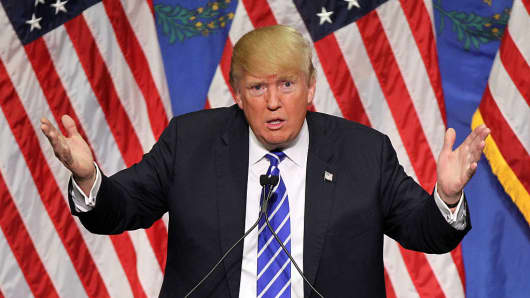 This letter was originally published on Medium.

We are inventors, entrepreneurs, engineers, investors, researchers, and business leaders working in the technology sector. We are proud that American innovation is the envy of the world, a source of widely-shared prosperity, and a hallmark of our global leadership.

We believe in an inclusive country that fosters opportunity, creativity and a level playing field. Donald Trump does not. He campaigns on anger, bigotry, fear of new ideas and new people, and a fundamental belief that America is weak and in decline. We have listened to Donald Trump over the past year and we have concluded: Trump would be a disaster for innovation. His vision stands against the open exchange of ideas, free movement of people, and productive engagement with the outside world that is critical to our economy  —  and that provide the foundation for innovation and growth.

Let's start with the human talent that drives innovation forward. We believe that America's diversity is our strength. Great ideas come from all parts of society, and we should champion that broad-based creative potential. We also believe that progressive immigration policies help us attract and retain some of the brightest minds on earth  —  scientists, entrepreneurs, and creators. In fact, 40% of Fortune 500 companies were founded by immigrants or their children. Donald Trump, meanwhile, traffics in ethnic and racial stereotypes, repeatedly insults women, and is openly hostile to immigration. He has promised a wall, mass deportations, and profiling.

We also believe in the free and open exchange of ideas, including over the Internet, as a seed from which innovation springs. Donald Trump proposes "shutting down" parts of the Internet as a security strategy  —  demonstrating both poor judgment and ignorance about how technology works. His penchant to censor extends to revoking press credentials and threatening to punish media platforms that criticize him.

"We have listened to Donald Trump over the past year and we have concluded: Trump would be a disaster for innovation."

Finally, we believe that government plays an important role in the technology economy by investing in infrastructure, education and scientific research. Donald Trump articulates few policies beyond erratic and contradictory pronouncements. His reckless disregard for our legal and political institutions threatens to upend what attracts companies to start and scale in America. He risks distorting markets, reducing exports, and slowing job creation.

We stand against Donald Trump's divisive candidacy and want a candidate who embraces the ideals that built America's technology industry: freedom of expression, openness to newcomers, equality of opportunity , public investments in research and infrastructure, and respect for the rule of law. We embrace an optimistic vision for a more inclusive country, where American innovation continues to fuel opportunity, prosperity and leadership.

*DISCLAIMER: The individuals listed below have endorsed in their personal capacity and this does not reflect the endorsement of any organization, corporation or entity to which they are affiliated. Titles and affiliations of each individual are provided for identification purposes only.

Alec Ross, Author, The Industries of the Future

Commentary by Katie Jacobs Stanton, the incoming chief marketing officer at genetic-testing firm Color Genomics, founding partner of #Angels and a board member of Vivendi. Previously, she was vice president of global media at Twitter. Follow her on Twitter @KatieS.