With tension rising in recent years over territory in the South China Sea, analysts have explained to CNBC what conflict in the region could mean for global trade.

"Should conflict arise … the consequences for global trade would be gigantic," Francois Godement, director of the Asia and China program at the European Council on Foreign Relations, told CNBC via telephone.

Ratings agency Fitch supported the claim by warning in a report Wednesday that, "The potential economic implications (of geopolitical risks in Asia) could be severe in the event of a sudden escalation."

The report came after a ruling by the Hague on Tuesday which rejected China's claims to almost all of the South China Sea, in a case raised by the Philippines. The present situation in the area is being watched closely by stakeholders in the region's annual $5 trillion shipping industry.

The South China Sea is a vital trading passage for China, Japan and Korea, as well as other nations on the western rim of the Pacific, serving as their only bulk trading route with key markets in the Americas and Europe, amongst others. Over $5 trillion of annual shipping trade passes through the region, and, according to the Wall Street Journal, U.S.-only imports and exports make up $1.2 trillion of this. The waters allow domestic goods, oil and raw materials to transit to destinations around the world.

Circumnavigating the South China Sea to avoid conflict would be more expensive for shipping firms as the waters serve as part of the most direct sea route between the Asian and European continents. The extra distance would involve massive extra fuel costs.

Simon Lockwood, deputy managing director, marine at Willis Towers Watson believes that a shift in the balance of power in a region like this is unlikely to have an adverse effect on trading vessels, but added this was providing the power shift "does not coincide with open hostilities." 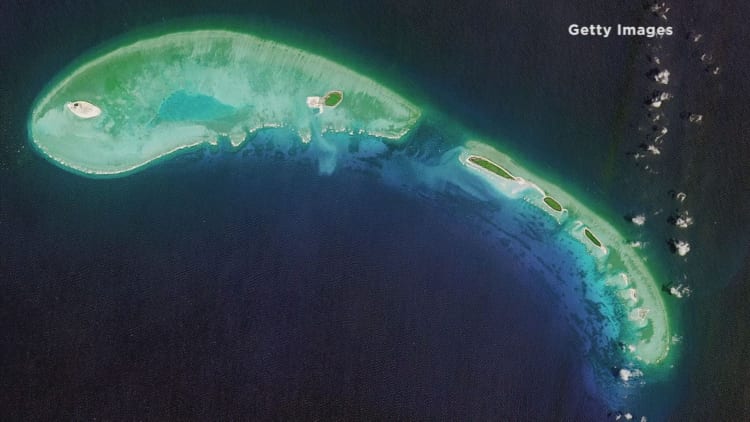 According to the Financial Times Monday, China's Maritime Safety Agency has announced that it will carry out military exercises in the South China Sea this week, though these are expected to be within its internationally recognized waters. The drills are third event of this kind announced by the Hainan MSA this year.

Industry voices say that shipping remains currently unaffected by the build-up of military equipment in the region. Andrew Brooker, a founding partner at shipping insurance firm Latitude Brokers explained that "trade routes are not affected, therefore costs are not increased and there is very little discussion amongst operators in the region (of disruption)."

Commodity markets responded apprehensively to Tuesday's ruling last week, with Brent crude futures rising $1 per barrel on the news according to Reuters. But, Maersk Line, the largest container shipping company in the world, told CNBC that their current operations in the area are normal with no change to existing procedures.

Despite inflamed rhetoric directed at the U.S. and its allies concerning the Hague's ruling, China said in a government statement on July 12 that it is, "ready to work with other coastal states and the international community to ensure the safety of and the unimpeded access to the international shipping lanes in the South China Sea."

Though some suspect that Tuesday's decision in favor of the Philippines could encourage other small countries in the region to reassert their claim to areas of the South China Sea, Godement believes that it is China who decides the direction in which the situation will progress.