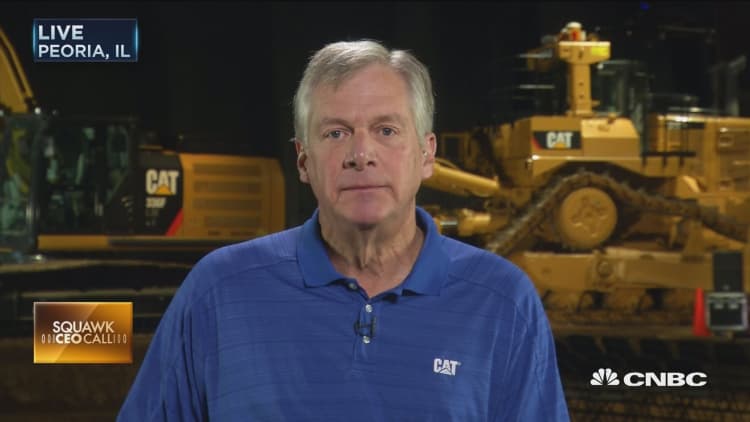 The company posted quarterly earnings of $1.09 versus analysts' estimates of 96 cents per share. Revenue was $10.3 billion versus estimates of $10.1 billion, but Caterpillar reported a lower quarterly net profit as sales of new machinery remained slow.

Worldwide, full-time employment was about 100,000 at the end of the second quarter compared with about 111,200 at the same time last year.

The flexible workforce decreased by about 2,700, resulting in a total decrease in the global workforce by about 13,900. The decrease was primarily the result of restructuring programs and lower production, the company said.

Sales and revenues for 2016 are expected to be in a range of $40 billion to $40.5 billion, and the profit outlook at the midpoint of the sales and revenues range is about $2.75 per share, or about $3.55 per share excluding restructuring costs.

"Despite a solid second quarter, we're cautious as we enter the second half of the year. We're not expecting an upturn in important industries like mining, oil and gas and rail to happen this year," Chairman and CEO Doug Oberhelman said in a statement.

Shares of Caterpillar rose more than 1 percent Tuesday morning, recovering from a downturn during premarket trading.

"I'm pleased with our financial performance and focus on our long-term strategy given the difficult economic and industry environment we're facing," Oberhelman said. "Our goal when sales decrease is to lower costs so the decline in operating profit is no more than 25 to 30 percent of the decline in sales and revenues."

The earth-moving machinery maker in April reported first-quarter earnings that fell short of analyst expectations, and it lowered its midpoint 2016 revenue outlook. The company blamed a continuing slump in demand.

"What I'm most proud of is the way our people are responding, the way we are getting at cost structure, restructuring and getting through this the way we never have in prior downturn[s], so I'm pretty happy with that," Oberhelman told CNBC's "Squawk Box."