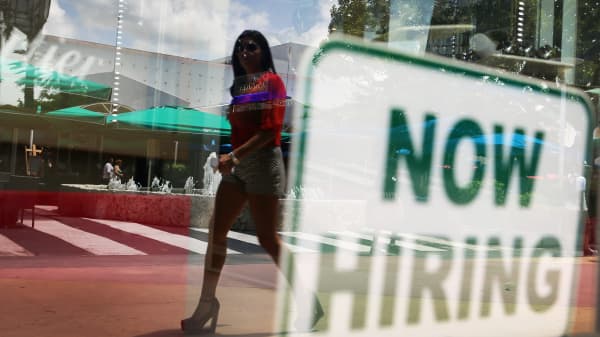 The U.S. unemployment rate remained at 4.9 percent in July, the Labor Department said Friday. But relying on that one number as an indicator of the job market is an oversimplification of the complicated world of employment.

Each month on jobs Friday, the Labor Department's Bureau of Labor Statistics puts out a slew of employment-related data, each of which tells its own story about the jobs situation. Most economists look past the official unemployment rate — also known as the "U-3" number — to other metrics that provide other views of the state of jobs.

One of those figures is the U-6 rate, which has a broader definition of the unemployed. That rate rose slightly in July — to 9.7 percent.

That is, the unemployed, the underemployed and the discouraged.

The U-6 rate has shown improvement in the past few years, and it fell to 9.6 percent in June, the lowest level since April 2008. It's been more volatile than the U-3 rate. The U-6 is down 70 basis points over the past year, versus a 40-point drop in the U-3.

Economists were looking for evidence of sustained gains in the labor market after a disappointing May added only 24,000 jobs. The market rebounded in June with a gain of 292,000 jobs. The nation added 255,000 jobs in July, beating economists' estimates of around 180,000.

One area of concern in recent months has been the labor force participation rate, which measures what portion of the population is employed or looking for work. The participation rate has fallen since the recession, largely because of demographic shifts such as the baby boomers retiring. Some economists think workers are still feeling discouraged and not actively seeking work. Others think it's more cyclical factors or changes in the economy.

In July, the participation rate was up a tenth of a percentage point to 62.8 percent.

As the labor market tightens and more people find work, you'd expect wages to rise as employers compete with each other to attract the remaining qualified candidates. In recent months, wages have in fact been increasing after a few years of tepid growth. Economists have worried that many of the jobs being added are low-wage, low-skilled jobs. A recent study by economists at Harvard suggested that it may actually be beneficial for the economy.

The employment situation is bound to be a factor in the presidential election in November. Democratic candidate Hillary Clinton began laying out her jobs plan in recent weeks, calling for increased spending in infrastructure programs. On Wednesday, she promised workers outside of Denver "millions of jobs with rising incomes," according to The Denver Post.

Republican candidate Donald Trump has repeatedly criticized the Obama administration, claiming that it has allowed American companies to ship jobs overseas and not done enough to create growth at home.

With the 255,000 jobs in July, the nation has netted more than 10 million jobs since President Obama took office. At this point in his tenure, that's around half the jobs added during Bill Clinton's terms and a little less than those added under Ronald Reagan.